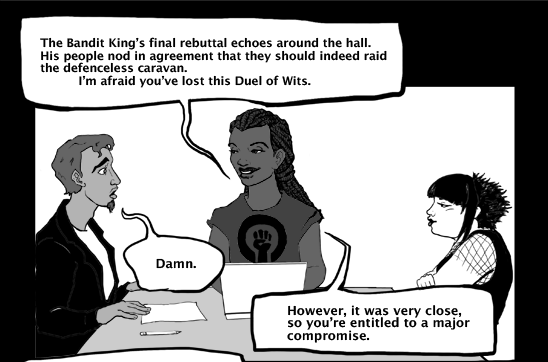 Tash: The Bandit King’s final rebuttal echoes around the hall. His people nod in agreement that they should indeed raid the defenseless caravan. I’m afraid you’ve lost this Duel of Wits.

Tash: However, it was very close, so you’re entitled to a major compromise.

Farid: What does that even mean?

Tash: You can’t stop them from raiding the caravan, but they have to do something else for you.

Emma: So, we’ll let them raid the caravan but first they have to set themselves on fire.

Tash: … No. It’s a major compromise not a suicidal compromise.

Farid: They can raid the caravan but only if they do it naked!

Farid: After they wait a thousand years?

Emma: …Without their spines?

Tash: Since neither of you can come up with a major compromise, you forme to make one for you: The bandits will raid the caravan and as a compromise the Bandit King will give you half of the loot.

Emma: Yeah, we have our own blood money!