And the Best Story Goes To… 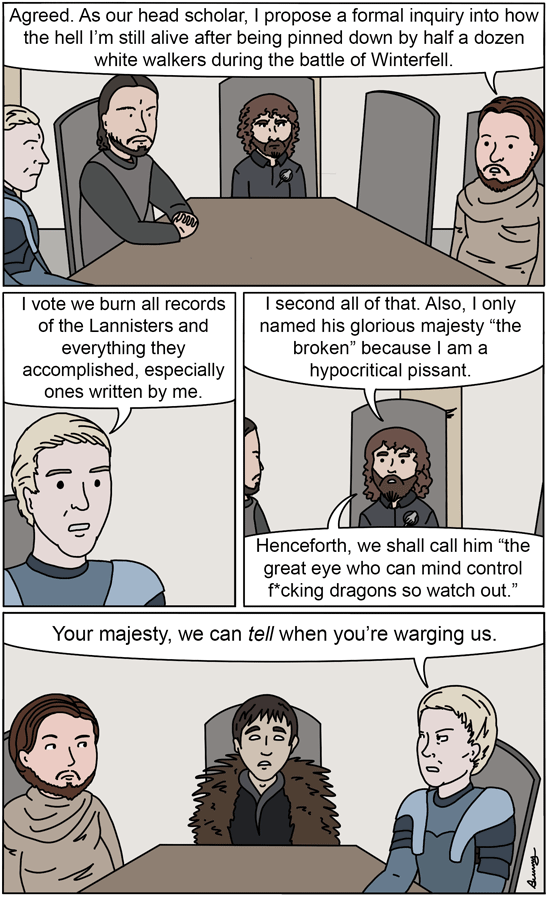 A group of men and one woman knight are sitting at a narrow table in fantasy clothing. A man with a blank expression is speaking. The others are looking at him warily.

The Master of Coin: As first order of business, I resign since I am obviously too greedy to be trusted with all the coin in the royal treasury.

The Maester: Agreed. As our head scholar, I propose a formal inquiry into how the hell I’m still alive after being pinned down by half a dozen white walkers during the battle of Winterfell.

The Knight speaks next. She also has a blank expression.

The Knight: I vote we burn all records of the Lannisters and everything they accomplished, especially ones written by me.

The Hand of the King’s face now looks blank.

The Hand of the King: I second all of that. Also, I only named his glorious majesty “the broken” because I am a hypocritical pissant. Henceforth, we shall call him “the great eye who can mind control f*cking dragons so watch out.”

A young man sits at the end of the table. He looks like he’s in a trance, with only the whites of his eyes showing. To his right, the Knight looks annoyed.

The Knight: Your majesty, we can tell when you’re warging us.