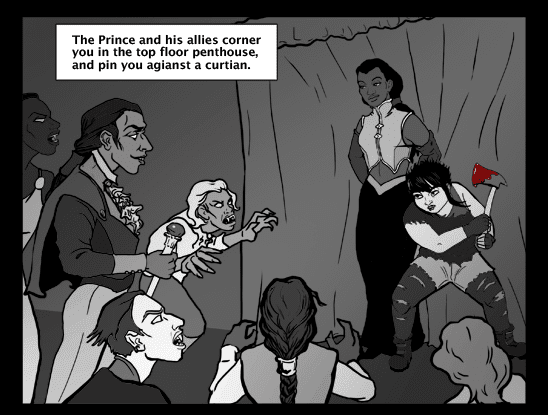 In the game, Tash and Emma are surrounded by enemy vampires and pressed up against thick curtains. Emma has her axe out and it is covered in blood. Tash looks unconcerned.

Farid (Voice over): The Prince and his allies corner you in the top floor penthouse and pin you against a curtain.

Emma: Well, that’s it, we’re dead. Even with Celerity and Potence I can’t fight that many.

At the table, Tash looks sneaky.

Tash: Farid, is this curtain big enough for a vampire to hide in?

In the game, Tash tears the curtain off the window to reveal the rising sun. Tash covers Emma in the curtain, but is burned by the light just as the Prince and his allies are.

Tash: Because the Prince and his court have forgotten how late it is.

Emma stands covered in the curtain, with piles of ash that used to be the other vampires surrounding her. Tash’s voice comes from one of the piles of ash.

Farid (voice over): The Prince, his court, and Tash’s character are burned to ash.