Five Things to Know When You Get Content Editing 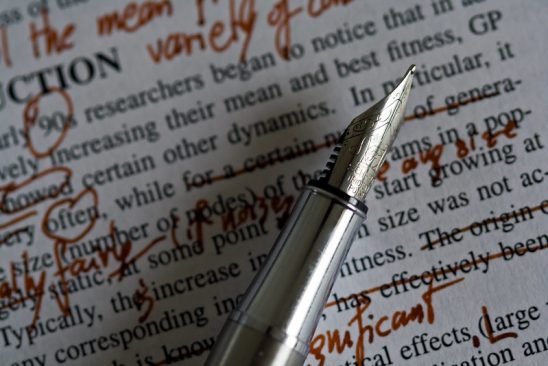 I Tend to Scribble a Lot by Nic Mcphee used under CC BY-SA 2.0

Content editing, also known as developmental editing, looks at big-picture issues. It means examining a story to see if there’s enough conflict, if the throughline is strong, if the character arcs are satisfying, etc. Ideally, it’s the first type of editing a manuscript gets, well before the fine tuning of beta readers and copy editors.

As one of the content editors here at Mythcreants, I generally have a great time working on each manuscript. However, I’ve noticed several common gaps in author knowledge that impede the process. These five things are important to know ahead of time, so you can get the most out of your edit.

1. You Must Be Willing to Revise Your Story

A content edit is concerned first and foremost with the big picture. My job isn’t to polish description or improve dialogue. I look at entire plot threads, and then I tell you what works and what doesn’t work, along with options for how to fix problems. If I were doing a content edit on Harry Potter and the Goblet of Fire, I wouldn’t be concerned with how snappy Harry’s quips are. Instead, I’d recommend a total overhaul to Barty Crouch Jr’s infiltration story because it’s just too convoluted to be believable.

The problems I find in content editing can’t be solved with small adjustments, so it’s important that authors be willing to make major revisions. Those revisions might be in line with the options I lay out, or you might find your own brilliant solution. Either way, your next draft will look significantly different. That’s just the nature of content editing.

Naturally, some authors are reluctant to change their work. I get it. I immediately fall deeply in love with every word I type, and I hate changing any of them. But when I pay someone to tell me where my story needs work, I find a way to listen to them, and it’s important you do the same. If you’re not willing to revise, then hiring me is a waste of your money, and I don’t want anyone to waste their money!

Of course, some authors order content editing with every intention to revise, but then they realize they just can’t do it when the time comes. That’s one of the reasons we recommend submitting outlines first. If you’re at all unsure about your ability to revise, using an outline is a cheaper way to test your readiness.

2. Your Story Needs More Work Than You Think

One of the many problems facing new writers is that there just isn’t a good system in place for teaching them how to evaluate their own work. Writing classes are inconsistent and often of poor quality. Writing groups, both online and off, are the Wild West when it comes to advice, and it’s impossible to tell good from bad. Even using published books as a benchmark doesn’t work well, as those stories usually go through several rounds of polishing before we mere mortals see them.

As such, it’s all too common for a client of mine to think their story is almost ready for publication, only for me to tell them that the core plot structure isn’t working and will require some serious effort to fix. This can be hugely discouraging, to say the least. Some authors have trouble getting their inspiration back after such a major shock.

While it’s probably impossible to completely avoid this disappointment, knowing what you’re in for in advance will help. Nearly every manuscript I edit requires major changes, and this is even more true for first-time authors or for stories that haven’t been edited before. Even if the manuscript seems like it’s 99% of the way there to you, that’s probably because it’s your writing. Few of us are objective judges of our own work, and that absolutely includes me. We’re too close and can’t see the problems that are obvious to an outside observer.

Making revisions doesn’t diminish your accomplishment. You’ve finished a draft, and that’s something to be proud of. There’s nothing wrong with you as a writer because the story still requires some revisions; it just puts you in the company of every author who’s ever put words to paper.

Here at Mythcreants, we believe that almost any manuscript can be turned into a good story with enough work and revision. However, that doesn’t mean every manuscript is worth that much effort. Sometimes, authors will reach a point where it would be less work to start from scratch, rather than revising what they already have. This is especially common when authors first seek out content editing, as they don’t yet have a strong grasp of story structure, and their plotting can be really rough.

If you reach that point, it is perfectly okay to put the old manuscript down and work on something new. Or, take a break from writing altogether, whatever works best for your process. Some writers, especially new writers, have this idea that putting their current manuscript in the trunk is a failure. They fear that all the time, effort, and money they put into that story is wasted. That’s not the case.

Instead, your trunked manuscript is a learning experience. Now that you understand what went wrong, you can start fresh with those lessons in mind. Beginning a new manuscript is simply more efficient, as you can lay a proper foundation from the beginning, rather than trying to go back and add one after the fact.

The tipping point where it’s no longer worth it to keep revising a manuscript is different for everyone. Some authors have endless wells of revision energy. They can keep working on even the roughest manuscript until it shines. Others prefer to write one manuscript after another until they finally get one that doesn’t need a lot of revisions. You have to make that choice for yourself based on your own writing process, but both paths are valid.

4. Social Justice Is Critical to Storytelling

It’s very important to me that potential clients know where I stand on sexism, racism, homophobia, and other social-justice topics. That’s one reason I write so many articles about them. Even so, this is an area where it’s easy for authors to get defensive. Sometimes, it’s because a client hired me without realizing where I stand on these issues; other times, the clients thought they were doing fine and were surprised when I pointed out problematic elements.

I understand the instinct to get defensive about a manuscript’s social-justice issues. None of us want to write stories that might harm our readers, so it’s a real blow to be told we’ve done so anyway. But that’s part of the process. We can’t fix problems we don’t know are there, and it’s so much worse to only find out about something like this after a story’s been published.

When I point out a social-justice issue in your story, I’m not shaming you or saying you’re a bad person. Again, we all make mistakes like this, especially the more privileged among us. What matters isn’t that you made the mistake but that you’re willing to put in the work fixing it. And while that process isn’t always pleasant, it also means you’re not likely to make that mistake again in the future.

Finally, it’s important to understand why I point out social-justice problems. First and foremost, it’s the right thing to do. Not harming marginalized readers is a worthy goal on its own. But avoiding these pitfalls will also help your story be successful. As general social awareness grows, readers are less and less accepting of stories that send harmful messages. Getting your social-justice ducks in a row will not only make your story more successful now but also give it a longer shelf life in the face of evolving societal values.

I love working with a manuscript across multiple drafts, and I’m always honored when an author finds my recommendations helpful enough to come back for another round. However, there’s one unfortunate trend I often see in second drafts. Instead of addressing a serious issue with the plot, authors will simply add more justification for why that issue is there, either in dialogue or narration.

Needless to say, this strategy never works. If a plot problem can be fixed with a better explanation, please believe me that I will recommend that first. If I’ve recommended a more substantial change, then that’s what the story needs. Adding more justification actually makes the story worse in most cases. It requires way more exposition for the reader to absorb, and even if the explanation is elaborate enough to be technically plausible, it will confuse most readers too much to be of any use. Plus, most readers will have a hard time remembering the explanation later anyway, if the basic situation still doesn’t make sense.

It’s not difficult to see why authors do this. We’ve already gone over how difficult revisions can be, and it’s tempting to think that really all you need to do is add more dialogue explaining why this plot hole isn’t really a plot hole. That certainly takes a lot less work than actually revising major elements of the story.

But even in the best-case scenario, this is just papering over a serious problem, and it probably won’t accomplish that much. What’s more, if you decide to bring a manuscript back to me and I find justification substituted for an actual revision, I can only tell you that the original problem is still a problem. That’s not a great use of your money, and it’s really important to me that you get your money’s worth from my edits.

The most important part of a content editor’s job is making sure the client gets value out of the experience. I do everything I can to make that happen on my end, but editing is a two-way street. Authors also have to do their part, otherwise a content edit is just a waste of money. Fortunately, simply adopting the right mindset goes a long way. If you know what to expect from the editing process, you’re already a lot closer to making your story shine.