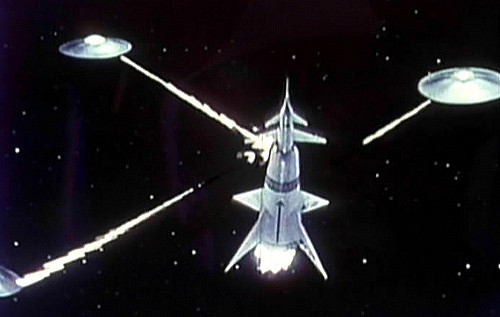 Space battles are an important aspect of science fiction, especially space opera, and we want them to be engaging. At first blush, that might sound easy. Space battles have hyperdrives and torpedoes and lasers, oh my. How could that not be engaging? But it’s harder than you might think. Spacecrafts are complex and alien. It’s easy to drown your audience in endless technical details, fill page upon page with ships firing ineffectually at each other, or leave the audience wondering why the battle was set in space at all.

Fortunately, we storytellers are clever folk, and we have methods at our disposal for ensuring our space battles keep the audience on the edge of their seats. So strap in to your favorite spaceship and spool up the FTL drive. It’s time to explore some tips on keeping your space battle engaging. 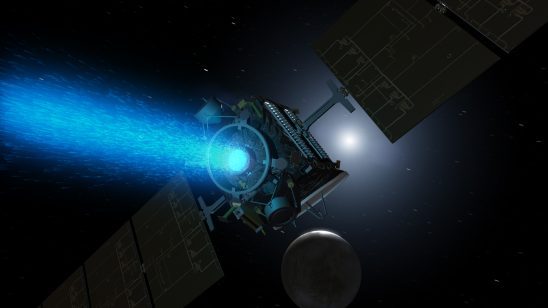 I say this a lot, but space is big. Really big. So big that it’s difficult for our puny meat brains to comprehend. It’s also really empty, meaning that hostile ships will probably see each other from a long way off. This means that combatants will be engaging across millions of miles or more.

At those distances, the speed of light is no longer effectively instantaneous. It takes light one second to travel 186,282 miles, so by the time you see something happen that far away, it actually happened one second ago. At space distances, it’s impossible to know exactly where your enemy is. By the time the light* bounces off them and reaches your sensors, they’ve already moved.

This makes shooting difficult and calls for unique solutions. Ships in your setting might fire volleys of long-range missiles that can track the enemy once they close the distance. Or your ships might employ powerful prediction algorithms to guess at where the enemy is going to be and then fire at that spot. They might even sweep arcs of laser fire through the void like swords, trying to score a hit.

You have a lot of freedom in what options your space combatants use, as long as it has some plausibility. You can even use far more outlandish possibilities if you set them up properly. Your ships might battle by creating small gravitational singularities next to the enemy or broadcast mind-control memes via radio waves. What’s important is that your weapons feel like they’re designed for use in space. The vacuum is starkly different from any other battlefield, and unique weapons will help bring that home.

If you want a battle to take place at close range, you’ll need to set up a good reason for it. If it only needs to happen once, you could craft a scene in which two ships open fire as they depart from the same station. If you want close-range battles to be the norm, you’ll need a more robust explanation. Perhaps your setting’s FTL drives teleport ships directly to their destination, Battlestar Galactica style, which allows combatants to get really close to each other before attacking.

2. Determine Your Character’s Level of Control 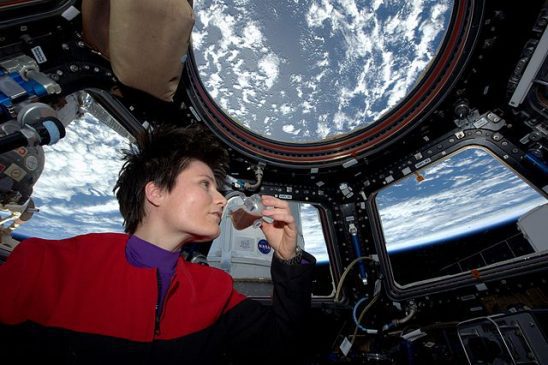 A space battle probably won’t be your hero floating alone through the void.* They’ll be on a spaceship and fighting enemies who are also in spaceships. This adds a layer of distance between the combatants, and it affects how you portray the battle.

First, decide how much control your character has over the ship. This can be broken down into three broad categories.

Your character’s level of control will have a huge impact on how the battle is perceived. When a character is one with their ship, they perceive space as if through their own eyes. They “see” anything the ship’s sensors can detect. A pilot depends on display readouts, whereas a commander must often have data interpreted for them by subordinates, because there’s simply too much information for one person to handle.

Different control levels also influence a battle’s pacing. At the greatest degree of control, the battle will be fast and frantic, much like a sword fight, because the character is effectively fighting via their physical body. A pilot will have a little more time to think, but not much. They must plan each maneuver with only seconds to act, staying one step ahead of their enemy.  A commander must endure delays as their orders are carried out. Use this time to build tension while the character speculates what the enemy will do next and reflects on the cost of failure.

3. Use the Environment to Add Novelty and Realism 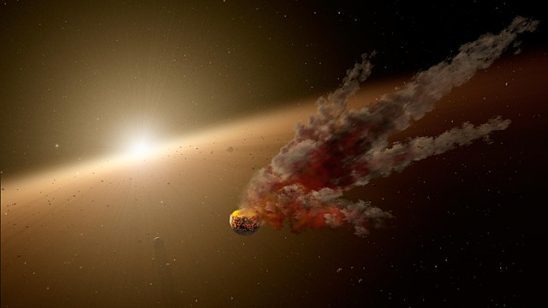 Space is an environment unlike any other. It is cold, and yet things stay hot for a long time because there is no air to transfer heat. It is dark but also filled with the light of many stars. Emphasizing the alien nature of space is a great way to make your story more engaging, because the coolness factor and the added realism will ground your audience in the setting. To emphasize the environment, use some of these elements.

Those are just four of the many options at your disposal. You can also have characters overwhelmed by the vastness of space or create a powerful dissonance between the vacuum’s peaceful silence and the many people dying with each flash of a breached reactor. The important thing is to bring in space itself as part of the story, so your battle doesn’t seem like it could have taken place on land, sea, or sky. 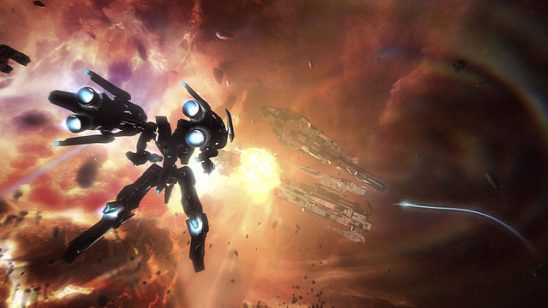 One of the toughest parts of narrating a space battle is deciding what the ships do. Sure, you can write that they fire at each other, but without understandable tactics, that won’t mean a lot to the audience. A fight between humans is relatively easy to understand, but when space-faring vessels get involved, it’s harder to comprehend what’s happening. If your audience doesn’t understand the fight, they won’t be invested in the actions your characters take.

Fortunately, you don’t have to drown your audience in technical details. Instead, define what kind of advantage the combatants are trying to get over each other. For a low-tech example, consider naval tactics in the Age of Sail. In those battles, the main advantage was in keeping the enemy within your broadside, while staying out of theirs. This was simple in theory and incredibly complex in practice. It took a masterful knowledge of both the ship and the wind to maneuver properly, but a story about that period doesn’t need to explain everything. It just needs to show how the sail adjustment and weather reading allows a ship to get the advantage needed.

A story of space battles can use the same principle with different specifics. If your ships fight primarily with long-range missiles, then their tactics might revolve mostly around defense. Your characters would have to decide how to allocate their electronic countermeasures and point-defense fire. Do they try to stop every missile, or are they willing to let certain sections of the ship be hit in order to protect others?

On the other hand, if your ships fight by sweeping space with laser fire, their tactics could focus on herding the enemy into a smaller and smaller volume of space, until there’s not enough room to maneuver properly. No matter the specifics, the important part is that you have a general method and goal that’s easy to communicate. That way, when the characters order a specific maneuver or firing pattern, the audience understands why they’re doing it. 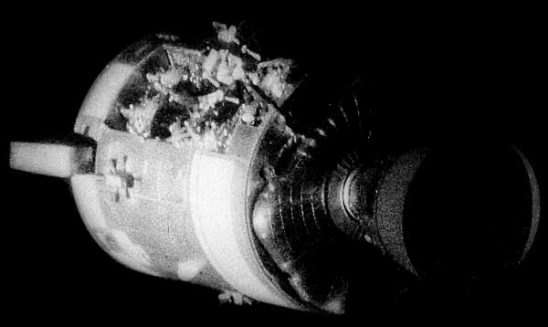 Finally, once you’ve figured out foundational details like distance and tactics, you’ve got to make this feel like a battle. One of the greatest weaknesses of space combat in fiction is that it can feel like two computer-generated objects are just flashing lights at each other until one of them disappears. In a battle, people are trying to kill each other, so it should feel like the characters are in danger. To do that, you must make the battle damage matter.

One of the more popular techniques in this area is to show how damage degrades the ship’s capabilities, making it harder for the characters to win the battle. This can work, but it requires that the audience have a thorough understanding of the battle mechanics in your story. Saying the main deflector dish has been disabled won’t matter much if the audience doesn’t understand what the main deflector dish did in the first place. Some storytellers try to fix this by having a character explain in the moment why losing the deflector dish is bad, but even that’s not great, since it can seem arbitrary or contrived.

Instead, you’ll get the best result if you first set up how the various components of your spacecraft work and then start taking them away. If your ships fight by lobbing missiles at each other, it’ll be easy to explain how the ship’s three radar dishes guide the missiles to their targets. From there, it’ll be intuitive that losing a dish makes the ship’s missiles less accurate.

A second option for making damage matter is to make it affect the characters directly. This is what Star Trek tries to do whenever consoles on the bridge explode, but you’ll want a method that makes a little more sense.* My personal favorite is to craft a setting where everyone wears spacesuits during a battle, so you can breach the hull without instant death by asphyxiation. Nothing makes the action impactful like a shot passing straight through the bridge, nearly taking off the protagonist’s head.

If it’s not feasible for battle damage to reach your characters’ location, you can still make the damage matter by endangering their friends. If you establish important relationships between your protagonist and some of their crewmates, you can ratchet up the tension by having some of those crewmates send a frantic call to the bridge saying how that last hit fractured the hull in their section and they can’t take much more.

And of course, if you picked a character who is one with their ship back in step two, you have even more options at your disposal. A character who inhabits their vessel can feel battle damage as a physical injury and react accordingly.

Like any other conflict, space battles follow the basic rules of storytelling. They need proper stakes, a strong motivation, a clear turning point, and so on. But space battles also have their own specific requirements. A poorly built one will seem distant and boring, but with the right techniques, the space battle can be a truly compelling piece of fiction.

Or whatever signal you’re using; it’s all limited by the speed of light.
Though that also sounds interesting.
Even if you were in a completely blank void, the mass of your body would generate a tiny amount of gravity.
In general, if something can be stopped by a surge protector, it’s not very threatening.