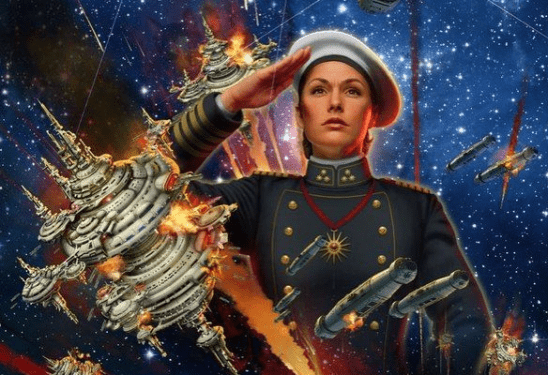 Worldbuilding is the act of creating context for the actions your characters take. Not every book needs to invest heavily in worldbuilding – no one asked about the geopolitical situation in the Very Hungry Caterpillar – but as your story gets more complex, your audience will expect you to explain what’s happening around your characters.

The Honorverse is a massive scifi space opera written by David Weber, and the main series currently spans 13 novels. These stories follow the exploits of the titular character, Honor Harrington, as she progresses from an unknown commander serving in the Star Kingdom of Manticore’s navy to one of the galaxy’s most powerful military and political figures. With such a complicated story spanning so many novels, good worldbuilding is not only helpful but also necessary to keep readers engaged. These are some of the ways the Honorverse builds one of the most compelling worlds in modern literature.

Although the Honorverse’s most recent installment involves a complex web of intrigue and conflict spanning multiple star nations, the series doesn’t begin that way. In the beginning, the story is limited to Honor, her ship, a small cast of secondary characters, and a straightforward mystery plot culminating in an exciting space battle. Weber also uses this first book to introduce us to Honor’s main antagonist, the expansionist People’s Republic of Haven.

Since this is a hard scifi setting, the technology also needs explaining. Weber walks the audience through each invention that makes his setting possible and introduces each technology the first time it is used. Weapons systems are introduced with a short space battle, faster-than-light propulsion is explained when Honor’s ship travels to another star system, and boarding craft are discussed when Honor needs to investigate an unwilling merchant ship. By explaining his world’s technology in easily digestible chunks, Weber minimizes the likelihood of overwhelming his readers. With the groundwork laid in his first story, Weber is free to slowly expand his world and Honor’s role within it.

The next book sees her promoted and commanding a larger vessel, but the overall scale of the conflict is similar to the first novel. By the fourth novel, Honor is a major noble commanding multiple ships, facing both military and political opponents. Weber’s gradual approach to expanding the world is key to not overwhelming his audience or boring them with page after page of exposition.

Standing in opposition to Honor is the People’s Republic of Haven, a democracy-turned-oligarchy that uses conquest to fill its empty coffers. This brings Haven into conflict with Honor and her allies.

In the early books, Weber dedicates several short chapters to showing what motivates both the rulers of Haven and their agents, which Honor is in more direct contact with. By portraying the villains as more than a group of mustache-twirling baddies, Weber shows the readers that the conflict goes deeper than simple good versus evil. Haven is in the wrong, but there are decent people on both sides.

Weber builds on this later in the series when, after a government shake-up, Haven becomes a more sympathetic faction, albeit one that’s still an antagonist. The Havenite characters we’d been following throughout the last several books take up leading roles in their nation. By spending time with Haven, the audience is prepared to be sympathetic to and even root for the characters opposing Honor. Weber humanizes the antagonists and shows that they are motivated by realistic needs. This is an important part of building a believable world, as an audience quickly catches on when the villains act in ways that make no sense.

Although set in the far future, the Honorverse’s star nations and technology change throughout the series. In the beginning, characters lament the stagnation of tactical doctrine; decisive victories are almost impossible because the losing side can simply hide behind impenetrable shields when they retreat.

As the books continue, new weapons are invented to break the stalemate. Capital ships begin focusing on long-range missile technology, discarding close-range laser weapons in favor of swamping their opponents with massive waves of projectiles. From there, improvements in miniaturization lead to fighters boasting weapons powerful enough to destroy capital ships at close range. Next, carriers are built in order to move these anti-ship fighters between star systems. To protect their capital ships, Navies quickly design new fighters to destroy the old ones.

Weber models the technology in his world after World War II, with the supremacy of battleships being supplanted by carriers and their aircraft. By building technological advancement into his stories, Weber shows his audience that the world isn’t stagnant.

For hard scifi like the Honorverse, it’s important that technology moves forward in a believable manner. Just because modern weapons are really good at killing things doesn’t mean we aren’t always looking for new ways to do it even better. Fantasy and soft scifi might get away with technological stagnation, as it’s a common part of those genres, but a hard scifi audience will start to question why no one is trying to address weaknesses in the setting’s current technology.

As the name suggests, the majority of the Honorverse is spent with Honor herself, listening to her thoughts and experiencing the world as she sees it. However, Weber uses multiple viewpoints to give the audience insight into events and characters that Honor would have no way of meeting or interacting with. One example, as I mentioned earlier, is how the audience gets a glimpse into the series’ villains to better understand what drives their actions.

However, that’s not the only time Weber uses different viewpoints. Often, he’ll add short chapters from the viewpoint of Honor’s superiors back on Manticore as they either support or hinder her actions. This shows Honor’s impact on the world, contextualizing her actions and how she shapes the story.

The third way Weber takes of advantage of different viewpoints is to illustrate tragedy. Several major tragedies take place within the Honorverse. Some of them touch Honor directly, and others are more indirect, but almost all of them are experienced through someone else’s eyes. Weber illustrates the destruction of a major space station with three short chapters about people currently on the station watching the destruction race towards them. Reading the last panicked moments of a father, unable to save his child, is poignant and works to show the audience that the Honorverse isn’t filled with faceless mannequins intended to drive Honor’s story forward. Instead, it is populated with real people who have stories of their own.

These emotional moments are powerful experiences for the reader. If the only viewpoint was Honor’s, there would be no way to directly experience an event without her physically being there, a problematic constraint when some of these tragedies involve the deaths of anyone close enough to see them happen. By briefly seeing the world through another set of eyes before returning to Honor, the audience knows the world is bigger than Honor. She may be the center of the story, but she’s not the entire story.

The Honorverse, like many far-future science fiction stories, is set after humanity has left Earth to colonize the stars. As such, you’d expect people of all Earth’s nationalities and races to be represented. Where many stories fail in this regard, instead defaulting to a cast of almost entirely white European people, the Honorverse succeeds with flying colors.

Weber created a world that’s more diverse than any other I’ve read, and not just for unimportant background characters. Honor herself is of mixed Asian-European ancestry, her crewmates’ names suggest a melting pot of ancestries from all around the world, and the queen of Manticore is a woman of color.

This kind of representation is sadly rare in works of fiction. Unfortunately, even Weber doesn’t include many non-straight people in his work, but writing a story where racial and gender equality are the norm is a huge step in the right direction. Beyond the cause of social justice, diversity is important to realism. The real world is becoming more cosmopolitan and interconnected every day. The audience believes in Weber’s world because its diversity reflects reality, which is so often poorly depicted in fiction.

The Honorverse is not a perfect series, but without a doubt Weber crafted a rich and detailed world capable of supporting over 20 total novels. If you’re a fan of scifi or the detailed worlds of series like Lord of the Rings and Game of Thrones, I’d recommend the Honorverse to you. The first novel, On Basilisk Station, is an easy read and a great introduction to the series.