Five Ways to Make Your Character Stand Out 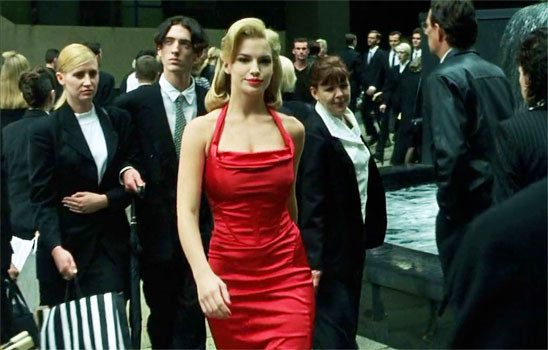 Red dress? Pft. You can do better.

Are you worried your characters are forgettable? Don’t be. Just sacrifice small rodents in the name of Scientor* until everyone sees visions of your heroes whenever they close their eyes. Or you could do the boring, normal thing and read this list of suggestions I made for you. I won’t tell anyone.

Does your story have a slick and corrupt politician? He’s probably an old white guy, isn’t he? Forget that. Now she’s young and black. But that shouldn’t make her a hard-working hero from the poverty-stricken streets of Chicago. She comes from a family of millionaires. She spends government cash at exclusive upscale clubs, accepts luxurious gifts from corporate lobbyists, and uses under-the-table deals to get special favors for her district.

Is there a little old grandma who comes by every afternoon to give all the kids at the daycare baked goods? No, no, not a grandma. It’s a thirty-something biker dude. He’s got a rough beard and mean tattoos scrawled all over his huge muscles, but he isn’t mean; he’s a softie. He has several degrees in early childhood education and tutors three kids after school. He runs a home ec class where he teaches kids to bake bread and sew hems.

Don’t let flaccid character conventions get you down. Go for unusual combinations. If you have to, write down different traits and draw them from a hat. It’ll spark your imagination and keep you from following clichés off a cliff.

Does your character get sweaty palms every time he enters a crowded room? Shelve those sweaty palms; this man is terrified. He comes to work an hour early every day just to avoid the morning rush hour. He always takes the stairs to avoid crowded elevators, except for the day he ran into a large group of workers going up and down to stay in shape. Feigning interest, he got on their email list. It warns him whenever the scourge will be clogging the stairs again.

Do you have a character that likes to boast? Oh no, “like” is far too mild a word. She lives to boast. Her non-stop social schedule is an excuse to tell whoever will listen about all of her accomplishments. She’s a charmer who makes friends easily, but they never stick around long. Pretty soon she starts to sound like a broken record, telling every glorified story over and over as though they’ve never heard it before.

Don’t be shy; push that character to the next level of eccentricity. No one is remembered for being mediocre – unless they’re so mediocre they must be under a curse, because no one could possibly be that revoltingly mediocre by chance.

She’s a natural performer. Thousands gather to see her sing, dance, or just talk, and she never disappoints them. So she should be confident in person, right? Boo! That’s dull. As soon as the performance is over she flees to the back room, afraid to hear a word from any of the strangers that know her name. What if they told her that her singing was off-key or her dancing was clumsy? Every time she tries to speak to one of her fans, her voice comes out in a croak. Then she turns red in embarrassment.

He spends all of his spare hours crafting toys in his basement. Then he sets them up in elaborate window displays with clever names and reasonable prices. Around the winter holidays, kids will stop and stare at the flashing lights under layers of cotton snow. So does he sell lots of toys? Of course not. Every time someone asks about one, he says it’s already sold. Then he carefully removes the toy from the window and brings it back downstairs. He hopes no one will see him playing with it himself.

Don’t banish your characters to Flatland.* Round them out with some juicy surprises for your audience. Do two traits seem impossible together? You’re the storyteller; make it possible. Use magic if you have to.

4. Contrast Them With Others

Your character goes to a high school were every teen vies to acquire the most expensive hoverbike and show it off to all their friends. So does he want a hoverbike? Pleeeeaase. He doesn’t need one; he’s got a dinosaur. He bought a parking pass for it, but he’s still trying to get it to stay in a single parking spot. The other students complain that his dinosaur is damaging their bikes, but no one can prove those dinosaur footprints were made by his dinosaur. He swears it was some other dinosaur passing through.

Maybe your story is set in a small town full of dark-haired people who like organic vegetarian living. If your hero’s just like them, go to jail and don’t pass “Go.” Her parents may look like every other citizen, but she has white hair and a ravenous taste for blood. She endures snickers from the lunch room every day, as others tell her that her diet of steak and liver is taking a terrible toll on the environment.

Don’t let your protagonist be the only normal person in a sea of weirdos. Next they’ll want a midlife crisis and manic pixie love interest to solve it for them. Put a stop to that nonsense right away by forcing them to confuse and confound their mundane neighbors. If they protest, tell them it builds character.

5. Show Them Impacting the Story

Your character is a schemer who is always manipulating others to her advantage. So what? Oh – did you say she tricked her brother into holding a charity event so she’d be off the hook for a large pledge she never paid? That’s starting to sound devious. But if she’s really so manipulative, she’ll weasel out of any hardships in your story. Maybe she angered the villain by making a large promise she never meant to keep, then forced her poor niece (and your main character) to defeat the big bad for her.

Do you have a character who’s always convinced he’s being followed? That doesn’t sound like much. If he frequently ducks into stores to modify his appearance, now that’s something. But not as remarkable as after he’s declared the winner of the “Rule the World Contest,” and none of his potential allies, abductors, worshipers, or old heart throbs can find him to let him know he’s their new overlord.

Don’t leave your characters to rant on and on about how awesome they were during their glory days. Their glory day is right this second, while they’re steering your story in a direction that it was absolutely not intended to go.

If all else fails, you can always resort back to rodent sacrifices. Except your character should perform them for you. Let them create an army of small zombie spies or make a foolish attempt at their own luxurious fur coat. Even if your audience can’t remember your character’s name, they’ll remember that.

The Evil God of Science, who I totally did not just invent.
Where all the female characters are so one-dimensional that they have to sway back and forth constantly, lest they become invisible and impale some poor male on accident.