How Metagaming Can Improve Your Campaign 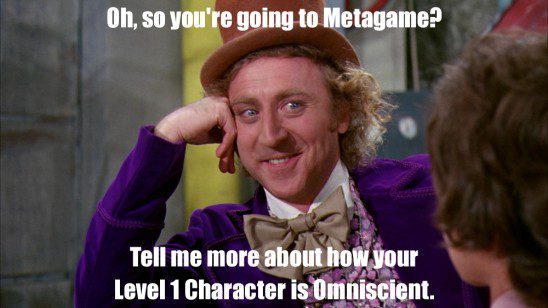 One of the more frustrating habits a roleplayer can have is metagaming too much. The frequent metagamer can alienate the game master and other players if they start to feel that the metagamer is so concerned with winning that they are no longer playing in good faith.

In roleplaying, metagaming is the use of player knowledge, which your character is ignorant of, when making decisions that affect the course of the game. It is a practice that is generally discouraged, because it can break the suspension of disbelief in the adventure.

Let’s say that two of the characters from a party, Stoic the Paladin and Nimble the Rogue, are presented with the following scenario in the course of the game. Stoic returns from a side task after leaving Nimble to disarm a corridor full of traps. Nimble is nowhere to be seen, and Stoic has witnessed Nimble running ahead of the party on numerous previous occasions. Stoic should most likely conclude that Nimble disabled the traps and went deeper into the dungeon without waiting for her to return.

However, while Stoic was away, enemies that had been tracking the party attacked and captured Nimble. Stoic’s player is aware of this, because she was sitting at the game table when the game master resolved the conflict and captured Nimble. The player knows Nimble didn’t have the chance to disarm any of the traps within the corridor, but Stoic has no idea that she is walking into a hall of fully functional traps. If Stoic’s player purposefully avoids the corridor of traps without seeing any indication that Nimble was captured, that would be metagaming.

The reasons to avoid metagaming are pretty straightforward. By acting on information that your character should not be aware of, you’re effectively cheating. 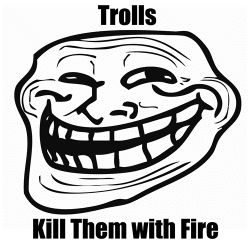 If a party encounters a group of trolls and immediately switches to fire and acid attacks (to neutralize the trolls’ regeneration), but the characters have never before faced a troll, then players are exploiting their out-of-game knowledge. Sure, you may know from reading the Monster Manual that you need fire and acid to kill a troll, but why would your cleric know that if he’s only ever fought undead?

Much of the heroism of an adventure disappears if you remove the learning that should be part of a character’s development. Heroes should sometimes make mistakes by acting on bad information. They should have to learn as they go how to best fight off a challenge. If it takes two or three tries before your party figures out how to keep a troll dead, then in future encounters, your characters will have the satisfaction of easy victories through knowledge that they earned during that first fight.

Going back to Stoic’s example, if her player avoids the temptation to metagame, and she only manages to rescue Nimble after she is severely wounded by the traps, it is all the more dramatic for having come from a position of disadvantage. Stoic’s player can now make roleplaying decisions about how she develops as a character, and how she acts when the deck is stacked against her.

Forget Everything Else, Here is How Metagaming Can be Awesome

Now, contrary to everything I have just said, metagaming can be used as an excellent tool for players to help increase the tension and contribute to a more dramatic story. Before playing, discuss what expectations everyone has for the game. If the players in your group value the creation of a compelling story over “winning” the campaign, then player knowledge can be used to help drive the narrative in interesting directions.

This form of metagaming is commonly used in my roleplaying groups when one character has backstory that they are hiding from the rest of the party. The player shares their character’s backstory with the rest of the group so everyone can be aware of the direction the character’s story arc may take, which allows them to make subtle contributions.

When Nimble was first created, his player decided that the rogue was a deserter, and he needs to keep this hidden to avoid arrest. After sharing this information with the group, Stoic’s player has the idea to have Stoic start making periodic quips about how she loathes disloyalty and cowardice. Stoic herself remains oblivious to the discomfort she is causing Nimble, but the roleplaying group gets persistent foreshadowing that Nimble’s past will eventually catch up to him.

Another way that players can use metagaming in a positive way is to forward the plot by setting up characters for a future conflict. This allows the players to build anticipation, since they know the conflict is coming.

Returning to Stoic and Nimble’s conundrum, before starting on the adventure they had been told by a sage that this dungeon was the tomb of an evil sorcerer and filled with powerful relics. The sage warned the heroes against revealing their intentions when they passed through the local village, as the townsfolk believed the tomb was cursed, and feared retribution if it was disturbed. Nimble never heard this warning however, as he had snuck away to steal some of the sage’s valued collection. Once Nimble arrived in town to purchase supplies for their dungeon delve (and sell his ill gotten gains), Nimble was asked by a merchant what they were questing for. Nimble’s player, knowing fully that he was about to turn the town against them, had Nimble monologue in great detail their plans to break into the sorcerer’s tomb.

If the players are all making appropriate use of metagame knowledge, the adventure could take the following path:

If you are unsure of what might be an appropriate use of metagaming, a good rule of thumb is as follows: if the result of acting on player knowledge is purely positive for your character, it is best to avoid metagaming. As a player you should aim to always use information you’re privileged to have in a way that improves the campaign for everyone at the table.