How to Narrate a Riveting Fight Scene 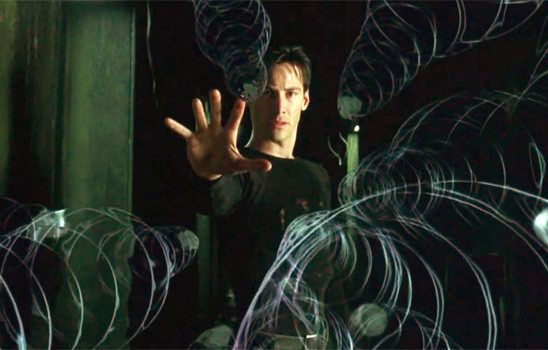 After facing defeat, Neo has his moment of realization.

Many stories depend on fight scenes for action and excitement. Storytellers are used to watching marvelous fights on screen, but that doesn’t tell us how to make combat riveting with our words. So it’s no surprise Ellie sent us this question:

I was wondering if you guys have any tips on how to make a good fight scene that’s not short but also not boring. How can you add interest and tension in a fight and not just have them punching each other?

Extended combat is typical for a story’s climax, but long fight scenes are more difficult to narrate than short ones. If you’re not careful, your exciting fight could become a slog. To make your narrated combat – short or long – the gripping experience it should be, follow these guidelines.

The Fight Must Matter

Even if you narrate your fight perfectly, it won’t be exciting unless you make it matter. Before the fight even starts, you have to get your audience interested. You need a character they care about trying to achieve a goal they understand. The consequences of winning or losing the fight have to be important, and the audience needs to know what they are.

In some cases, it’s obvious that the hero’s life is threatened, but not all fight scenes are life or death. In these cases, look for ways to give your fight more meaning than a few bruises or broken ribs. If you show how your viewpoint character is emotionally invested in the fight, the audience will be invested along with them.

In most cases, it’s easy to raise the emotional stakes:

These are still low stakes, suitable for the beginning of a story. As your story progresses, the stakes should get higher. By the climax, the outcome of a fight should either change your character’s life or end it.

Blows Must Matter to the Fight

When you’re narrating a fight scene, blows aren’t important because they look cool or use interesting technology; they are important because they change the likelihood that the hero will win. Imagine the protagonist and antagonist are competing in a tug of war, each trying to bring the center of the rope into their territory. In their struggle for victory, they could wield lightsabers, build clockwork soldiers, or raise the undead, but unless that rope moves toward one side or the other, it won’t mean anything.

You might have noticed that in movies and TV shows, the villain and the hero rarely alternate every other punch. Instead, the villain will attack again and again until the hero is down, and then the hero will make a miraculous recovery and strike back for a bit. The viewers are thinking, “Oh no, the villain’s winning!” and then, “Yay, the hero’s winning!” Swinging the expected outcome back and forth makes the fight exciting.

That’s why blows aren’t interesting unless the audience understands how they affect the hero’s prospects. Show their consequences:

The most riveting moments appear when the hero is in immediate danger of defeat. Perhaps they fall and lose their weapon, and at the same moment the villain’s hammer comes rushing down. A monster might grab them and pull them in, its enormous maw closing over their head. Escalate the threat before your hero turns it around.

Good fights have fast pacing. Unfortunately, if you keep the fast pacing up too long, your audience will become exhausted. Plus, your hero can only fight hand-to-hand with the super villain in the abandoned factory for so long before it loses its novelty.

So the longer the fight is, the more you need to switch things up to keep the scene engaging. Consider creating some lulls in the action, so your audience can catch their breath:

When the combatants start battling again, it will be more engaging because you gave the audience a rest.

You can also switch it up by changing the scenery as you go. The fight in the abandoned factory could start on a moving assembly line, continue in the facility vents, and end up in the ceiling rafters. Maybe the boat goes over the waterfall, and the combatants continue the fight while they’re swimming in the water below. To add interest, these shifts should change the nature of the fight. Don’t forget to show how this impacts the hero’s chances of winning.

One of the most common mistakes is attempting to recreate the visual complexity of a movie or TV fight with narration. Even if you were to perfectly describe a scene where the hero jumps into the air and carries out a series of complex maneuvers as the villain soars past them, the human brain can’t hold onto that many details at once. At best, your audience will pause to sort out what’s happening, halting their riveting experience. Even if they understand the description without trouble, it won’t bring them the same joy as witnessing it on screen.

Warning signs of overloaded description include:

To maintain a fast pace and ensure your audience can keep up, your description should be streamlined down to the essentials. Employ active phrasing to keep your wordcraft from obstructing your exciting scene. That is, until you get to one of those moments when the hero is in immediate danger. When the tension is at its highest, slow down with some poetic description of the threat. Just as the monster is about to bite the hero’s head off, he might smell the monster’s rancid breath and observe the blood staining its teeth. This extends the moment of suspense.

The story doesn’t stop when the fight starts. Your hero is still the same character with the same strengths and flaws. They still hate, dislike, or perhaps love the antagonist, and the antagonist is probably still a jerk. The combatants should fight as their personalities dictate and voice their grievances with each other if they’re so inclined. During a lull in the fight, let your antagonist whisper something that hits home.

While you may not have visuals, your combat can have something else: thoughts. The fight will be critical for your viewpoint character; show the audience what they are thinking and feeling. Do they hold back because they don’t want to hurt their brother despite his betrayal? Is their anger getting the better of them, causing them to strike out too quickly? Even as they shoot, are they wondering what they could have done to prevent the fight from occurring?

Look for ways to work your setting into the fight. A battle in the graveyard where the hero’s parents are buried won’t mean much until it affects the character’s actions. Maybe after the hero is hurled onto the ground in front of her mother’s gravestone, she grabs a tribute she left there and uses it as a weapon. Then she might regret breaking the item, or she could feel satisfied knowing her mother would approve. If the fight is in a factory, turn on the equipment and make someone’s clothes get caught in a moving belt.

The objective of the fight could even change midway. Maybe the hero is fighting to rescue his father and then learns during the fight that his father is dead. Now he’s motivated by revenge. His moves might become wild and aggressive, his tactics reckless. The audience has reached this fight because they like your story; don’t disappoint them by neglecting it.

Make It a Battle of Personality

A fight may be a physical contest, but the best fights aren’t won through the hero’s speed, strength, or accuracy. In most cases, the hero has no control over those things during the fight. To give your hero agency, their personality must win the day. That means their wits, virtues, or choices are the deciding factor. If your hero can change their physical attributes as a special ability, it’s their decision to make the change or their cleverness in doing so, that matters. Increase the conflict in your fight by making it hard for them.

Character agency comes in many forms:

Just like your fight scene could be the climax of your story, the scene itself needs a climax that will tip the scales toward the winner. If your hero wins, a good tipping point is a moment of realization where the hero resists temptation, learns an important lesson, or figures out a puzzle. You can also show how a choice the character previously made allows them to win. Your antagonist might flee when she learns the hero faced and overcame the fears he had the last time they fought.

It’s typical for heroes to fail fights in the first half of a story to provide contrast with their victory at the end. In these early scenes, leaving your character without agency can create a sense of helplessness. However, failures are usually more powerful if it’s the hero’s fault. If he was too fearful to fight back, rushed into the fight head first, or made some other strategic blunder, that will help you build his character arc.

The trick is that a fight scene is much like any other conflict in your story. Cool moves can add flavor or build atmosphere, but ultimately combat will have interest and tension because your story does. Your fight is a pivotal moment in the story; give it the meaning it deserves.

We have a form right here, so you can ask away.