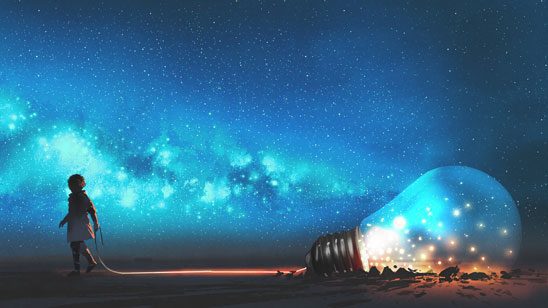 When we start creating stories from concepts, it’s usually best to work on whatever grabs us. That way we can focus on shaping our inspiration into a strong plot structure that centers our darlings. If this process isn’t familiar to you, I have an article specifically on turning sparks of inspiration into a story, and many people also find my short story outline process helpful.

With enough time, a new storyteller becomes an old hand at finding new premises and creating a basic plot structure from them. Once you get there, the next step is to be a little more discriminating about which stories you invest time in. This doesn’t have to mean throwing away your new darling. Simply benchmarking your ideas based on ANTS criteria and making tweaks can do wonders in improving audience enthusiasm when you’re done. Let’s go over how to do that, letter by letter.

Start by checking if your character has sympathetic and/or selfless traits. If you need ideas, see my handy list of likable character traits.

It’s most effective to have both sympathetic and selfless traits, but it’s not essential. If you are missing one because you have a character who’s comfortable or selfish at the start of your story, I would work to bring the other aspect out as much as you can.

Next, think about whether you’d like your main character to be relatable or distinctive. Either is a good choice, but knowing will help you make strategic decisions when depicting your character.

Once you think about these things, you should know the general strategy you will be using to get readers to fall for your character. Next, plan how you will bring these things out in the beginning of your work. It’s not effective to just tell audiences that your character has these traits. Telling includes making other characters talk about your protagonist or alluding to things that happened offscreen. The audience needs to see these traits in action during the story’s opening. Maybe the hero helps a cat out of a tree, and as a result, they’re late to work. Perhaps they give up their meal to someone hungry on the street. Do the best you can to weave it into your overall plot.

Novelty comes in many forms, but speculative fiction is powered by highly novel settings, so we’ll start there.

Start by considering the basic elements of your setting.

If you don’t already know your subgenre of speculative fiction, these considerations should help you find it. While a future dystopian cyber-tech story is almost certainly cyberpunk, an Earth-like world with lots of natural landscapes is probably some type of medieval fantasy. Resist the temptation to think of your work as alone and apart from the rest of speculative fiction. Even if it’s truly unique, romanticizing it will not help you make it better. Find what commonalities you can.

What you’ll do next depends on your setting and subgenre.

The best choice of setting will not only have a cool and unique aesthetic to it but will be something you can personally get excited about. If possible, choose something related to an area of expertise or interest you have. If you’re into environmental causes, choose a setting where ecosystems are important. If you’re in the tech industry, choose a setting with the type of technology you are familiar with.

Your personal expertise and excitement are important because a setting that’s unique in theory but not fleshed out on paper won’t provide any novelty. If your space opera story uses magitech for space technology, you might have a ritual chamber instead of a warp core, and the ship’s AI might be some kind of divine spirit. You’ll need to feel engaged with the setting to generate details like these, and a wealth of details is what matters. If the setting doesn’t feel like it’s magitech, then it might as well not be.

Note: If you’re working on a short story, you may not have room to do a lot of worldbuilding. In that case, try to feature one setting element your audience can get excited about, like plant golems, fairies riding songbirds, or sapient computer programs.

For the rest of the story, the biggest thing you’ll want to do is check for clichés. The more well-versed you are in your subgenre, the easier it will be to judge what’s cliché. For characters, understanding typical archetypes like villains, love interests, or mentors is very helpful. If your characters feel like typical examples of a common archetype, they could come across as cliché. For your plot, watch out for anything that feels too predictable.

However, not everyone has time to read all the things. When in doubt, ask some fellow genre fans or look to see how many uses of the convention are listed on TV Tropes. Keep in mind that most tropes are not cliché; they’re just patterns that have been seen before. There’s nothing wrong with that.

Finding clichés isn’t the end of the world. You’ll just want to look for something unique to add. For instance, if your main character is a great hero foretold by a prophecy, you might give this trope a twist. Here are some examples:

If you decided on a distinctive hero in the last section, you may also want to think more about what uncommon traits you can give them that the audience will find interesting. For inspiration, I also have a list of some underused character ideas.

If you’ve gotten all the way to optimizing your story ideas, you’ve probably already learned a lot about this. When we start storytelling, conflict is usually the biggest thing missing from our stories, so much of our focus goes into creating it.

The reason we need conflict is to raise the story’s overall tension (the uncertainty over a problem that matters). Mastering basic plot structure means your story has some level of tension. However, some basic checks before you start writing can help you manage and maintain tension throughout the story.

Next, make sure the story’s tension never disappears. That often happens when the hero’s chance of succeeding gets too high or after those chances improve significantly. To maintain tension, make sure there’s always some level of urgency to the big plot problem. A passing day should matter, either because people are dying or because there’s a big deadline looming. In addition, if your hero ever has a significant win or gets new allies, etc., you’ll need to raise tension by introducing a new twist or making something bad happen. See my list of ways to restore tension.

Even though it’s important to have tension throughout the story, you don’t want nonstop urgent action. That will quickly become tiring. To give the story some breathing room, you’ll want to trade off between different types of conflict. Alternate exciting action scenes with interpersonal scenes that focus on character arcs. Characters can have a nice chat while they’re hiding from the big bad, while they’re fleeing in a vehicle, or while they’re locked together in a prison cell. The big problem is still looming over them, but they’re not running around at that very moment.

Whereas tension is about creating and maintaining compelling problems, satisfaction is about how those problems are solved. Once the outcome of a problem becomes certain, the conflict’s resolution has been reached. But to leave your audience feeling satisfied, they must feel that the character they’ve grown attached to earned their resolution.

One of the most common ways satisfaction is ruined is by robbing the story of character agency. Conflicts in a story need to be proactively addressed by the protagonist. You can get away with less agency in the story’s beginning, when the protagonist might be a fish out of water. Even so, they should be making choices that change the outcome of events. If the character just watches as the conflict happens or is dragged around by other characters, conflicts will feel unsatisfying – often even before the resolution appears.

Examining your protagonist in early stages can encourage agency. Look for two things.

Aside from that hurdle, the most important thing to examine in early stages is how the climax will work. If you’re a discovery writer through and through, you can make revisions later, but it’s much easier to pull off a satisfying climax by stepping back and thinking it through. Climaxes are tough to get right because they have a lot of requirements.

Altogether this is a pretty tall order. It’s quite common for storytellers with otherwise strong plotting skills to trip up at the climax. With such a challenge, the earlier you think about it, the better.

After enough drafts and revisions, you can create your own checklist. You might have little trouble with making sympathetic characters but have to do an extra step to add novelty. Take notes on what you could have done better, and look through them when starting the next story.