Overcoming the Myth of Barter

Many assume that before currency existed, people would trade goods through a barter system. This idea was created by 18th century Europeans hypothesizing about how markets worked before a state regulated currency. But in reality, we have no historic or anthropological evidence that this ever occurred. None at all, even in isolated societies that don’t have money for their internal exchanges.

Let’s think about it for a minute. If you make hats for a living, you need to barter your hats for food. But if you’re a skilled haberdasher, making a quality hat will take you a day or two and use lots of materials. To survive, you need to find someone who doesn’t already have a hat and is willing to trade you several days worth of food for it. And it better be something that won’t spoil, since you can’t trade part of a hat for a single meal.

To make another hat, you need to find a cloth maker that either doesn’t have one of your hats or is well off enough to collect them. Once you’ve made hats for all of your suppliers, you’ll need to start making your own cloth and hat pins, etc. That means making a hat takes even more time. A haberdasher’s trip to the market soon looks like a run to CostCo!

As we can see, barter is impractical for supporting any degree of workforce specialization. Maybe you could make it work for absurdist fiction held together by logic similar to Terry Prachett’s Disc World. But the rest of us need something a bit more practical. 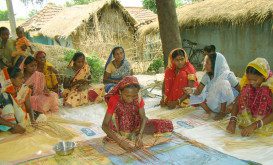 A group of Indian women making bamboo products they intend to sell in Dumka, Jharkhand by Jaimoen87 used under CC BY-SA 3.0

Once we leave the imagination of Enlightenment thinkers and enter the real world, we see a few different stages of development for economic exchanges. On the smallest scale, we have systems of mutual debts. My hunting went poorly one day, so you share some fish with me. On another day fishing is scarce, so I share part of a deer with you.

This is often called an egalitarian society, characterized as not having individual ownership. When you look below the surface, however, you find it is a series of mutual obligations. If I’ve received help from you in the past, I am obligated to return the favor when you need it, and vice-versa.

The process starts because friends and family are reluctant to let each other die of hunger. Once this system of mutual debts takes root, the threat of ostracization perpetuates it. If everyone in your small community knows that you don’t fulfill your obligations, they won’t be willing to help you.

Aindrui is part of a village hunting party stalking dire wolves that have been killing their herds. On the third day of the hunt, his party crosses a hazardous river and his companion, Sheila, loses her spear. Aindrui, the most skilled craftsmen of the group, fashions a new one for her that evening. They don’t discuss a price or when Sheila will repay him. Aindrui knows Sheila will not hesitate to reciprocate if he needs her help in the future. Besides, their hunt won’t succeed unless she’s armed with a reliable weapon.

Trade and Accounting of Debts 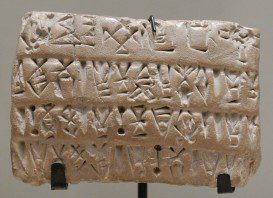 Economic tablet with numeric signs. Proto-Elamite script in clay, Susa, Uruk period (3200 BC to 2700 BC). Department of Oriental Antiquities, Louvre. by Marie-Lan Nguyen used under CC BY 2.5

An economic system of obligations requires a level of trust that is difficult to maintain on a larger scale. If a merchant trades with a large number of people on a frequent basis, they won’t trust everyone to repay informal obligations. To overcome this obstacle, people created ways of accounting for the value of goods and debts owed.

The concept of monetary value was introduced through units of standard goods. In ancient Sumeria, long before the shekel was a minted silver coin, it represented a weight of grain. As an early agricultural society, taxes collected from farmers and wages paid to workers were in grain. Shortly thereafter, the value of goods was priced in accordance to those payments. If one shekel was about 10 grams of barely, then an item priced at 100 shekels was worth one kilo of barley.

While goods were priced and some physical objects like coins may have circulated, the primary currency was credit. I owe you for the hat you made; you owe me for some eggs and milk, etc. Debts were recorded as a value tied to a commodity such as grain. Your trustworthiness was measured by your ability to repay your debts in a timely manner, rather than your willingness to share when your neighbors were in need.

This system for converting value helped traders make large one-time exchanges of goods. This was especially convenient for the farmers that actually grew the grain! But since exchange was based on credit, trust was still essential, and debts were still tied to the idea of personal obligations.

The hunt was successful, so Sheila brings two dire wolf pelts to Etna, the general goods merchant of her village. Etna prices the pelts at 50 crowns each. Sheila has traded with Etna many times before, and she currently runs a debt of 30 crowns, which Etna crosses off her books. While she’s there, Sheila uses another 20 for spices. Sheila could keep the second pelt for trading later, but she sells it, accepting Etna’s credit of 50 crowns.

Money as we know it comes into play when there is a state. If you are the head of an early state, the most important resource is still food. You can pay your soldiers in grains, or you can make coins out of available metals. Declare a measure of this coin as equal to a shekel of barley, and you have currency. As an all powerful head of state, your people understand your credit is good and accept the coinage as payment from soldiers and other workers. They know that they can go redeem the coin for grains to eat.

It’s still all about trust, but so long as trust in the state’s ability to repay coinage is preserved, people accept the currency. Personal obligation and virtual credit diminish significantly. If I don’t know you well, I can simply demand coinage, in which case I am taking the credit of the state instead of gambling on the trustworthiness of your credit. Building relationships becomes unnecessary as long as everyone has currency backed by the state. The relationships and obligations between you and I are replaced with relationships and obligations between you and the state. As a result, large scale markets can form and trade takes off.

After traveling to the capital for trade, Etna deals with merchants who do not know or trust her. Linens are in demand in Etna’s village, but the linen suppliers here won’t trade with her on credit. With so many soldiers and bureaucrats in the capital, actual silver crowns are in circulation. Etna manages to sell her dire wolf pelts for 75 crowns apiece, and with the heavy coinage in hand, can now purchase goods that her village will want.

As we’ve seen, economic frameworks are social frameworks. Relationships, power differentials, and long term obligations shape and are shaped by economic exchanges. At some point your protagonist is going to make an economic transaction, be it buying lunch or negotiating a trade agreement. How that drives their interactions with other characters depends on the economic framework of your world.

Maybe the standards of a modern western society will work for some worlds, but our stories will be limited if that’s all we use. Instead, delve deeper into the expectations and morals your cultures have for transactions. It will add depth, realism, and potential for conflict to your world.

To learn more about the development of economic systems check out David Graeber’s Debt: The First 5,000 Years