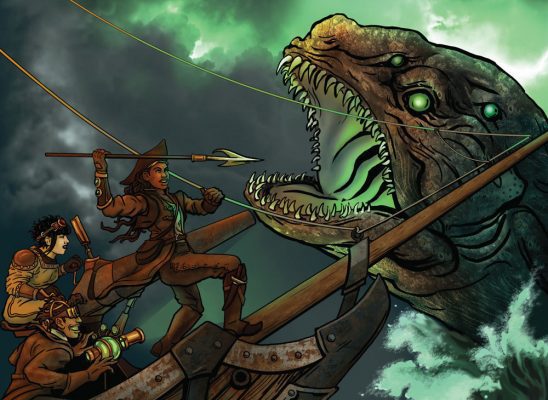 After the Island Empire fell, the seas were lost. Sailors whisper that the ocean air glows and tears open, releasing titanic leviathans that slither out into the sea. They say the very fabric of reality shifts with the wind, sending the crew falling into the sky or freezing the blood in their veins. And some swear that Imperial ships still prowl the waters, filled with dead-eyed crews that enforce their extinct laws.

Few dare venture onto the waves, but you are one of those few.

You refuse to toil in a smoky factory while your rich masters get richer. Instead, you’ve pooled your cash with a few other like-minded souls, enough for a small ship. Together, you’ll sail to the old Empire’s ruins, where hulking machines of iron, intricate boxes of gears, and caches of gems wait to be claimed. You won’t end up like the ones who don’t come back – or who come back wrong.

Mythcreants is proud to announce the release of Rising Tide, our latest tabletop roleplaying game. Rising Tide combines the desperation and resource management of Torchbearer with the steampunk, gothic-horror aesthetic found in games like Sunless Sea. While Rising Tide has its own setting and an extensive ship-based resource system, it is based on the Torchbearer rules set and requires the Torchbearer core book to play.

Rising Tide is a digital-only publication that can be downloaded immediately after purchasing. The rulebook is 189 full-color pages and features steampunk contraptions, spell-like abilities, ship management options, salvage tables, fascinating pre-built adversaries, and more. Interactive sheets for characters and ships are included with purchase. Designed by Oren Ashkenazi and illustrated by Lillian Ripley, Rising Tide will deliver a thrilling high seas adventure to your game table.

Don’t have a copy of Torchbearer? Purchase it here. 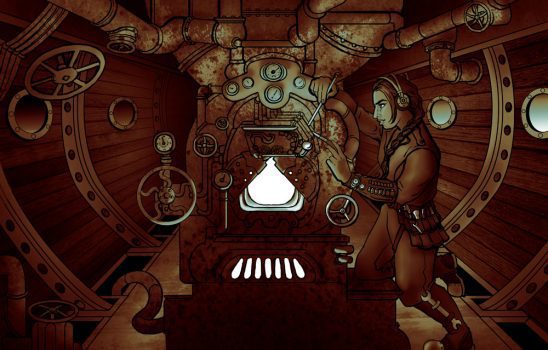 In Rising Tide, players work together to manage a ship and its crew. If you want to be successful out on the waves, you’ll need to make strategic choices about your vessel. Should you make room for a library to aid your research on the strange creatures you encounter or instead build a laboratory to better dissect them? A grand piano will boost crew morale during dark days, but if you bring a piano instead of enough food, the sailors will start to wonder what kind of incompetents are running their ship.

Once you set sail, you must balance terror with greed. Otherworldly leviathans and giant automata will endanger your ship, but explorers who lose their nerve too soon will return with nothing to show for their trouble. Glittering treasures and wondrous technology hide on every newfound island, but the explorer who stays out too long will never return to port at all.

If you do well, you can purchase a grander ship – one with more guns to protect your hard-won treasure or larger holds to carry it. 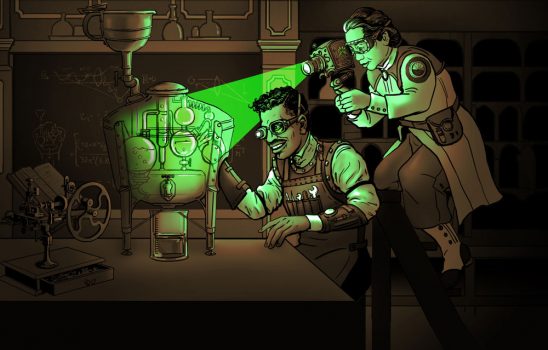 For a long time, humanity has known that a luminous metal from deep beneath the sea could be turned to strange uses. Sailors call this substance “glow.” The old Empire harnessed glow’s reality-bending radiation to construct juggernauts of iron and thinking cabinets that crunch numbers. Now the Empire has fallen, and the secrets of glow are scattered among its ruins.

By finding schematics for impossible contraptions, you can recreate devices lost to civilization. A steam-powered battle suit might be too heavy to move, but not once you alter the steel’s strength-to-weight ratio by exposing it to glow radiation. If you’re a scientist, you may go much further. Using carefully calibrated bursts of glow radiation, you can create your own changes in reality, like freezing the air solid to block pursuers or levitating your comrades out of harm’s way.

While some worry that this flagrant violation of nature’s laws will lead to dire consequences, the power is too much for many to resist. No matter our vocation, the glow calls to us all.

Play It Your Way

Rising Tide is designed to work for a variety of play styles. The nautical steampunk setting is flexible enough to allow game masters to fill in their own story while skipping all the hard work involved in creating conflicts and rewards for players. Players can take quick character classes or customize their skill options. They can ponder over their first vessel or use the pre-built starter ship to set sail right away.

Buy It Now or    Learn More