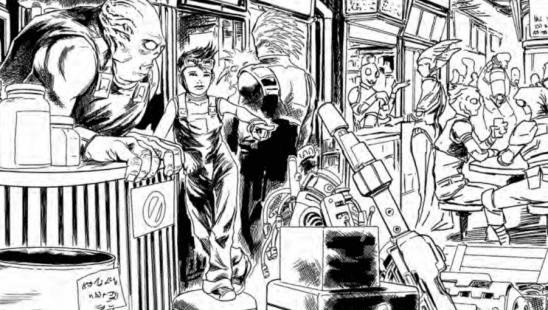 This post is 2 in the series: Scum and Villainy Roleplay
With character creation out of the way, our crew of shady bounty hunters is ready for their first job. But who would hire two weird cat-people and a cultist with a glowing worm under her skin? Why, the people who breed alien monsters for a living of course! That’s the job: go to the estate of a powerful noble family and retrieve a strange creature before it’s auctioned off to the highest bidder. Let’s hope our heroes are up to the task.

But first, we have to learn the system. Listen as Oren tries to explain all the ways Scum compensates for its strange dice mechanic, Jim realizes he can generate infinite gambits, Chris considers rolling Consort for everything, and Michelle frets about code names.

Enjoying our podcast? Thank us with a review on iTunes or Stitcher.