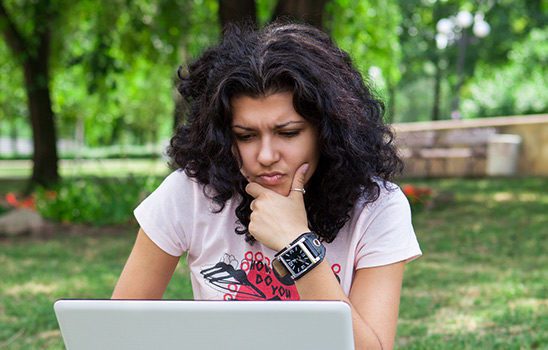 Confusion makes it impossible for readers to enjoy a story, and the unique elements of speculative fiction make it especially prone to confusion. Not only that, but because stories always make sense to their writers, head-scratching moments are difficult to eliminate without outside help. But don’t give up hope! You can identify and mitigate many common causes of confusion as you complete your draft. Watch out for these dangerous habits.

Throwing the audience right into unfolding action can help immerse them in your story quickly. However, unless the situation is incredibly familiar* to readers, they’ll need your help to understand what’s happening. That help usually comes in the form of thoughts, exposition, or dialogue.

To see what happens when too little context is provided, read this opening to Philip K Dick’s short story Beyond Lies the Wub.

They had almost finished with the loading. Outside stood the Optus, his arms folded, his face sunk in gloom. Captain Franco walked leisurely down the gangplank, grinning.

What Dick doesn’t say is that this is a starship crew on Mars. They just finished loading live animals on their ship to supply for a journey back to Earth.* I wish I could tell you who or what the Optus is, but Dick never explains.

Of course, it’s easy for writers to make the opposite mistake as well. Too much exposition slows the narrative to a crawl. You can avoid boring info dumps by:

While we should avoid inventing new terms when possible, writing in alternate realities means that we’ll inevitably have world-specific terms in our narration. Many of us will have special words for positions of power, novel technology, strange creatures, and more. But when we expect readers to be as well versed in our terminology as we are, confusion results.

You can help your readers navigate your fantastical terminology by:

Rowling’s “muggle” in the Harry Potter series is an example of a strange term used well. The term is clearly explained to Harry and used frequently in the books. Whereas in the book The Lies of Locke Lamora, author Scott Flynch uses invented calendar terms to mark time transitions between scenes. This is the worst place for fantasy jargon; time markers must be clear to prevent confusion. I read three pages into a scene before I realized the main character was now an adult instead of a boy.

If your characters use technical jargon that’s gibberish to readers, carefully explain its implications and offer a meaningful analogy. Star Trek uses these techniques to guide viewers through mountains of technobabble. When Voyager gets stuck in the belly of a space whale, the characters liken creating antimatter explosions to making the ship taste bad. They clarify that this technique requires the coordination of two ships and should result in the beast ejecting the vessels. However, this doesn’t entirely make up for using nonsense science terms. The more understandable and logical you can make your jargon, the better.

Most scenes are formed from the interaction of several characters. Unfortunately, readers can easily mix up who did what in a scene. Check to make sure that:

No reader can hold the entire text of a novel in their head. Their memory of your story will always be imperfect. For readers to follow a long story, writers should both make their important points more memorable and remind readers of information they’ll need to understand a scene.

You can make elements more memorable by:

Don’t dump too much information on your readers at once. Info dumps make relevant details feel unimportant, turn iconic markers into just another item on a laundry list, and overload readers’ working memory. Avoid introducing more than two or three characters at once, keep the setting’s layout or scenery simple, and don’t describe every movement from every limb in a fight scene.

In some cases, you’ll need to work around failures of memory. Repeat critical details or complex explanations to the audience. If a stream of dialogue is interrupted by a significant block of text (paragraph length or longer), the characters can’t simply continue talking where they left off. That’s because the reader won’t have the last lines in their head anymore.

Instead you can do this:

Speculative fiction is full of magic with arcane rules, technology that breaks the known laws of the universe, and cultures vastly different from our own. Add on the curious events that unfold in most stories, and your work will have a plethora of bizarre occurrences that could confound readers instead of intrigue them.

The first step to minimizing confusion is to make sure that you know how everything works before you write. Storytellers often assume that as long as their plot runs, they don’t need to know what’s happening behind the scenes. But once they’re asked to explain a confusing plot twist, they’ll realize they can’t. You’ll be better off if you reason through the background when your work is in its early stages. We have several articles that can help you think through common problem spots:

Next, look for elements in each scene that require explanation. Start with events or actions that are central to the outcome of the scene and your story overall. In most cases, readers should know:

If any of these are mysteries to reveal later, you’ll need to clearly mark that for your readers. Sanction uncertainty by acknowledging the puzzle you’ve presented with thoughts, dialogue, or omniscient narration.

Readers are great at supplementing the narratives they read with details from their imagination. This is wonderful; it means you don’t have to describe the color of every bootlace. But the longer those made-up details exist in their minds, the more confusing it becomes when readers discover their head canon is wrong. It may not mean much if a character’s eyes are a different color than they imagined, but if the plot revolves around something that clashes with their own conception of events, readers will struggle with cognitive dissonance.

That’s why you should prioritize the information readers need to know and deliver the important points early. Plot-critical elements and broad sweeps go first; atmosphere-building and small details go after. Follow these tips to better prioritize information:

If you need to introduce critical information late, sanctioning uncertainty will help readers reserve a blank space in their imagination for those details.

Many writers love their medium. We take pride in a particularly well-crafted sentence, and then we hold onto it like hell when an editor tells us to cut it. Unfortunately, our efforts at creative wordcraft can become self-defeating. The more metaphors and poetic language we use, the more we risk confusing our readers. That doesn’t mean you shouldn’t use creative wording, just that some caution is warranted.

The opening sentences of a story are particularly treacherous in this regard. Writers want their first sentence to impress, but the reader desperately needs to figure out what’s happening. Some writers fall into the trap of revising their opening lines until they are so poetic readers have to read them multiple times. The result looks a bit like these lines from the opening of Battlefield Earth:

The hairy paws of the Chamco brothers hung suspended above the broad keys of the laser-bash game. The cliffs of Char’s eyebrows drew down over his yellow orbs as he looked up in mystery.

You might notice the first sentence is also a case of poor attribution – the paws are taking an action instead of the Chamco brothers. At least we have enough context to know that the “orbs” are eyes. By reading carefully, you can probably figure out what Hubbard is describing, but your opening is the last place you want readers to pause and sort out what you’re saying.

The wrong metaphors can also become distracting to readers. Yes, you can liken a person lying under the covers to the hills and valleys of a scenic landscape, but do you really want readers to be thinking about landscapes instead of your sleeping character? In the above excerpt, how does comparing Char’s eyebrows to cliffs give readers a better picture of what Char looks like? I don’t know what cliff eyebrows are. Maybe they’re just thick?

Too much poetically vague description can lead readers to imagine a very different picture than you intended. For instance, in Terry Brook’s Sword of Shannara, the character Allanon is introduced as a shadow that detaches itself from an oak tree. I thought the character had flown down from the branches and was shocked to learn that Allanon is wingless.

While we’ll all get better with practice, test readers are still invaluable to the writing process. A few test readers can help you learn what sources of confusion you’re prone to and help you catch problems you couldn’t see.

In other words, boring.
Apparently the animals are their food supply. They are not very good travelers.