Should Your Fantasy World Resemble Earth? 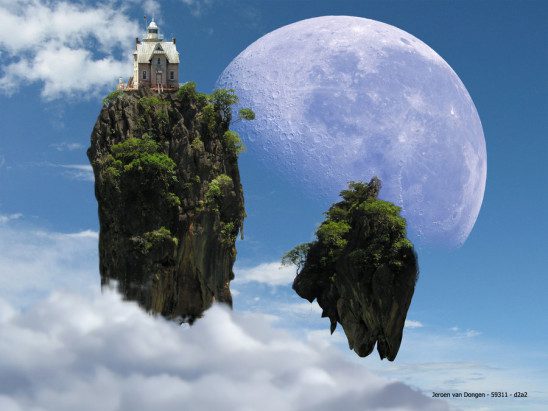 Fantasy worldbuilders usually start with an extensive foundation – the Earth. They then add geographical, cultural and magical details on top.  Most fantasy worlds have fantastical elements made possible by the presence of magic, but are still basically Earth underneath.

On the other hand, you could create a world that has a non-Earth foundation. It’s more difficult to start from a blank slate, but the end result – a world with magic tied into it from its formation – can be very rewarding.

Both approaches are good in different circumstances.

Earth-like worlds usually require less up front work, since all of Earth’s geology, ecology, and physics are available for use. This can allow more time for developing details like magic systems and languages, or for other story elements like plot and character development. It’s also easier to find relatable situations on an Earth-like world to involve your characters in, which makes it easier to engage readers’ emotional interest.

Like you, your audience is from Earth, and will assume things work like they do at home unless told otherwise. Thus it’s unnecessary to explain the Earth elements of your world to the audience, which means less exposition and more action.

However, if your plot or characters are weak, there won’t be much else to grab your reader’s interests. A world that is too much like Earth can be a disappointment to speculative fiction readers.

The time and effort you put into a non-Earth-base can pay off with a rich and unique world. Since Earth-like settings are common in the fantasy genre, a strange new world will have immediate impact on your audience.

A non-Earth world also makes it possible to fully integrate magic into the physics, geology, and biology of your setting. In a world created from scratch, the norms of Earth won’t clash with introduced fantasy elements, which can give your setting a strong internal consistency. That consistency will make magic feel like a natural part of the world instead of an add-on.

The trouble with changing all of the rules is that everything that isn’t “normal” has to be communicated, which is rarely as interesting to your reader as it is to you. In this case, be careful not to overload the story with explanations. Also, a world that is too strange, with hard to relate to characters, will alienate the audience.

Balancing the Familiar and Unfamiliar: Discworld

Terry Pratchett’s Discworld is one of the most easily recognizable fantasy worlds, since it’s structured very differently from Earth. First off, it rests on the backs of a four elephants that ride on a giant turtle swimming through space. The world itself is flat, with an endless waterfall spilling over the edge. It’s possible to be swept over and off into space. Where the inexhaustible ocean comes from and how it never diminishes is only one of the mysteries of Discworld. This world is clearly one that doesn’t rely on Earth’s basic shape or physics. Magic is what makes Discworld’s shape possible, so magic is a fundamental part of Discworld.

However, despite its unique shape, the denizens and protagonists of Discworld are, for the most part, the standard fantasy fare: wizards, heroes, trolls, witches, and so on. Such characters are comfortably familiar to speculative fiction readers. In addition, the mythology and plotlines are strongly inspired by their “normal” counterparts.

This combination balances between the new and the known to create a world both interesting and relatable. Pratchett employs two techniques to perfect this balance. He uses humor, which helps tell readers to expect something unusual and embrace it. He also ties Discworld’s magical elements closely to his plots, which means that his exposition can serve double duty for both giving worldbuilding information and moving the plot forward. Additionally, Discworld has developed over the course of many novels, which has allowed the setting to become complex without overwhelming exposition.

Both methods for worldbuilding can be effective in different situations. Using the Earth as a blueprint has the advantage of ease and brevity. It’s good as a backdrop to a strong character or plot driven story. A non-Earth base puts more focus on the world and fantasy elements, and so can potentially support more complex magical systems.

Whether you stick with the Earth as a base, try your hand at something different, or land somewhere in between, you can find a match for your story.