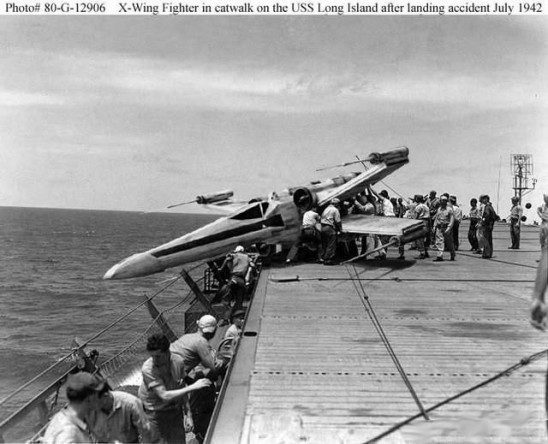 Who doesn’t love giant space battles with lasers and missiles and shields, oh my? Communists, that’s who. From Battlestar Galactica to Deep Space Nine’s Dominion War, some of our most riveting science fiction has come from spaceships trying very hard to destroy each other. Unfortunately, things get complicated when you introduce real science into the equation, and not just because there’s no sound in a vacuum. Space is an alien environment, and it’s difficult for us puny humans to understand all the potential difficulties of fighting there. The issues are so numerous that it’s no wonder filmmakers keep going back to a futuristic World War II. 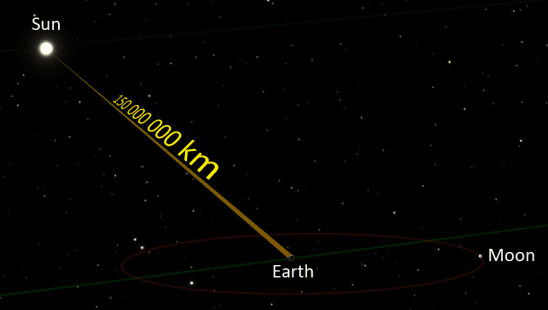 To quote the great Douglas Adams, “You just won’t believe how vastly hugely mindbogglingly big it is…” Models of the solar system don’t really do it justice. The distance between Earth and Pluto is about 53 times the distance between Earth and Mars. Objects in the asteroid belt are often millions of miles apart, and that’s considered densely packed in space. Instead of a Romulan warbird filling the viewscreen, enemy ships would appear as little more than blips on a radar display. Long range missiles and laser weapons would mean that the opposing sides would never get close enough to see each other.

While this can work pretty well in novels, it’s a major problem for visual mediums that depend on action packed dog fights to keep things interesting. What’s more, because space is so big, travel time can become a serious factor. In a lot of scifi franchises, travel is near-instantaneous due to fancy warp drives or what-have-you. In a more realistic world, getting from where you are to where the enemy is can take days or weeks, even with a relatively high level of technology. 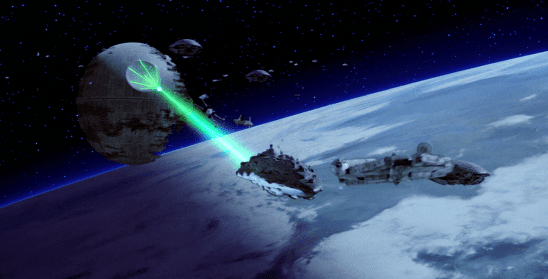 The iconic image of two capital ships slugging it out broadside to broadside simply does not work in space, and that’s because neither vessel would be able to take more than one or two hits from the other. In real life, we are already at the point where a single missile can sink a large warship, and that curve is only going to get more pronounced with new technology. It turns out that destroying something is much easier than keeping it intact.

Throughout history, weapons have gotten progressively more destructive, and armor has been unable to keep up. Modern body armor can usually stop small arms fire, but it is absolutely useless against anything more powerful. Even heavily armored tanks can be easily destroyed by much less sophisticated weaponry. The reasons for this are pretty simple. Machines rely on moving parts – be they a heart and lungs, or a fuel injection system. A weapon doesn’t have to destroy the entire target. Just mess up a vital system, and suddenly the whole thing stops working. Armor has to protect an entire object, while a weapon only has to apply destructive energy to one part of it.

In space, no one will think twice about deploying nuclear missiles* and all the power they contain, to say nothing of all the new and interesting ways humans will surely think up to kill each other. Even energy shields don’t solve the problem in a realistic universe, because the amount of energy needed to run them would pale in comparison to how much energy a laser would need to punch through.

There is one possible method of effectively armoring space ships, but it almost never features in stories: make your ship out of an asteroid. It turns out that a thick layer of rock and dirt is very effective at stopping explosions, even nuclear ones. There’s a reason bunkers are built underground. Of course, lumpy space rocks with engines welded on aren’t nearly as majestic as the USS Enterprise, which is probably why they don’t show up in science fiction very often. 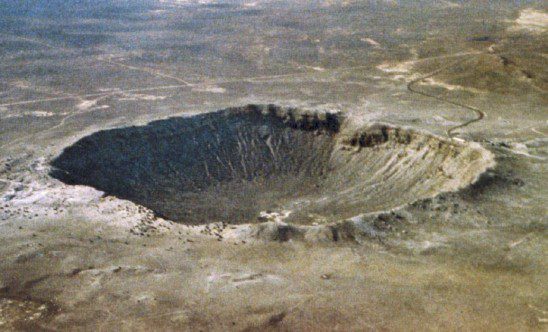 We all know how unrealistic the Death Star is, but what if I told you it was also complete overkill? Wiping out all advanced life on a planet, while a monstrous act, isn’t that hard if you have some handy space rocks floating around. All the would-be mass murderer has to do is grab a good sized asteroid and accelerate it toward the planet in question, then lean back and let physics do the work. It turns out that humans, like dinosaurs, are highly susceptible to asteroid impacts.

Stopping an incoming asteroid from the ground is really hard, and there’s no reason the attackers couldn’t launch a few dozen at once just to keep things interesting. The same principle applies to space stations or any other object that can’t significantly alter its trajectory. Rather than massive fleets laying siege to defiant worlds, all it would take is a single ship threatening armageddon. By the same token, actually conquering a planet with ground troops would be insanely hard, but that’ll have to wait for another day.

X-wings and Vipers might look like they’re speeding along, but it turns out they’ve got nothing on NASA. Back in 1969, the Apollo 10 spacecraft reached 24,791 mph, or about 32 times the speed of sound. Presumably, spaceships of the future will be even faster. They’ll have to be, because as was previously pointed out, space is really big. The problem is that humans simply cannot react at those speeds. Imagine yourself as a future gunner, trying to shoot at an enemy ship zipping by so fast that it’s gone before your brain has registered it was there.

To put this in perspective, the Komet rocket fighter flew at about 700 mph, and that was considered too fast for any practical fighting. The Komet would zoom past its targets so quickly that the pilot didn’t have time to shoot anything. Lasers go even faster; the speed of light, to be exact. Any ship under attack by laser weaponry would be hit at exactly the same time they realized they were being shot at. There would be no time for any dodging or weaving, no matter how good the pilot was.

5. Maneuvering Will Kill Your Crew 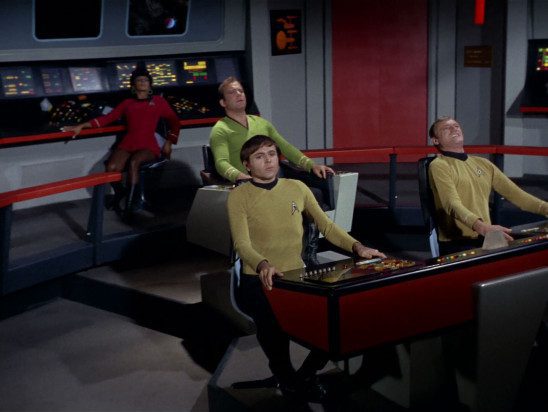 It turns out that going really fast in space isn’t a problem. Without air resistance, the speed of light is the only real limit out there. The problem is in how fast you accelerate. When a ship’s engines go to full burn, the crew are going to be pushed really hard into their seats. Human beings can only withstand so many gs,* and it gets worse the longer we have to sustain the pressure.

Combat maneuvers don’t have the luxury of slowly building up speed. When enemy missiles come burning in, you have to get out of the way fast, and that sort of violent movement will pose a real danger to your crew. Without magical devices like Star Trek’s inertial dampeners, sudden acceleration or deceleration can turn us fragile humans into pink smears on the back wall. The incoming ordinance doesn’t have the same biological restriction as a crewed ship, so avoiding it will be next to impossible. Sorry, Starbuck, but it turns out that Cylon missiles don’t have your fragile meat body problems.

6. Everything Should Be Done by Robots 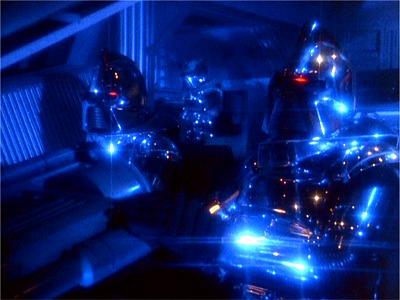 Computers can process information much faster than humans, and that gap is only going to get wider as technology advances. Even the modern military is relying more and more on computers when human reaction time just isn’t fast enough. The Phalanx missile defense system, for example, uses automatic radar targeting, with no direct input from its human operator.

Even without the development of fully sapient artificial intelligence, computers are getting better and better at independent operation. What’s more, they can be built to withstand far greater strain than the human body. Also, computers don’t need to breathe. A hull breach matters a lot less when there’s no air to leak out, to say nothing of the space saved from not having toilets.

Fully automated warships would be able to react faster and be much better at surviving than any ship crewed by flesh and blood humans. Not only would realistic space battles consist of radar blips shooting at each other, humans would be confined to watching those blips from even farther away. Both sides would send out robot fleets, and then have to hope that their version of iTactics was more advanced than the other guy’s. Perhaps not as exciting as the Battle of Endor.

None of this is to say that realism can’t or shouldn’t be applied to space battles, just that it must be done carefully, because it will drastically affect the story. Battlestar Galactica solved the problems of distance and speed with a teleportation-style FTL drive that put opposing ships within spitting distance of each other. The Honor Harrington series builds drama around the long wait between firing off a salvo of missiles and when they finally hit their targets. Leviathan Wakes absolutely revels in the crushing gs caused by violent combat maneuvers. What’s important is that authors who want to write hard science fiction be aware of these problems, and either turn them into advantages, or make a conscious choice to ignore them. Believe it or not, you can still write hard scifi even if you have to fudge a detail here and there. You just have to know you’re doing it.

Or hear you scream.
g is a measurement of gravitational force, where 1 g is the normal gravity on Earth.