The Origins of Brave, Tangled, and Frozen 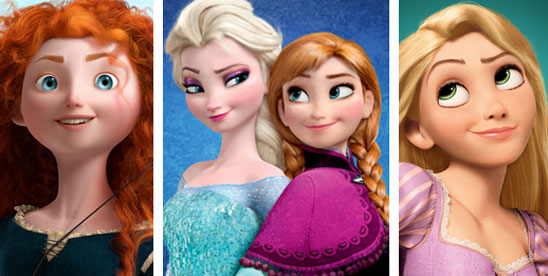 This post is 4 in the series: The Origins of the Disney Princesses
I’ve now covered three quarters of the Disney Princesses, and now we’ve finally entered the era of computer animation. Disney purchased Pixar in 2006, and these three movies, one from Pixar and two from Disney, clearly show the influence of both studios. Let’s look under the hood and see where their stories came from. 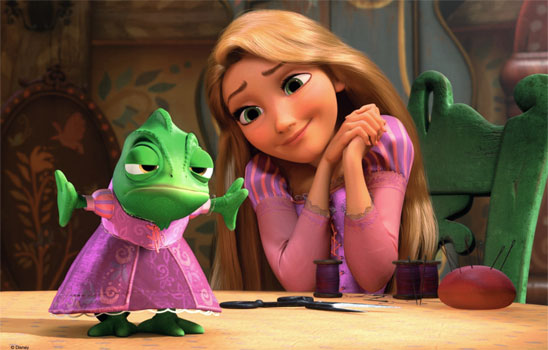 Tangled is based on Rapunzel, a fairy tale popularized by the Brothers Grimm. They took it from a German translation of the French Persinette by Charlotte-Rose de la Force, which was probably inspired by the folktale Petrosinella. The original name of the story and maiden is a reference to parsley, while the Grimm version is a reference to rampion. In both versions, before Rapunzel was born, her mother desired the plant so badly that without it she would die.* This was a problem because it was growing in the forbidden garden of an enchantress named Gothel.

Rapunzel’s parents were just commoners, so when Gothel catches Rapunzel’s father stealing the plant for his wife, he only gets her to spare him by promising their child to her. Gothel takes the girl when she is born, names her after the plant, and the parents exit the story. The enchantress doesn’t need the girl for any magical purpose. In Persinette, it’s suggested she locks her in the tower because she’s a loving, but seriously controlling, mother.

Disney’s Flynn is a big deviation from the male lead in the original – a generic, unnamed prince who hears Rapunzel singing when he’s wandering through the woods and falls in love. Rapunzel lets him up after hearing him call to her, only to be completely surprised when there’s a guy in her tower. But he charms her, and they make with the smoochies. Originally, Gothel discovers he is visiting Rapunzel because she gets pregnant. To make the story child-friendly, the Brothers Grimm edited their version so that Rapunzel reveals his visits with a brainless slip of the tongue instead. But they didn’t remove the part where she gives birth to his children, because babies come from storks.

Once Gothel finds out about their relationship, she cuts off Rapunzel’s hair and sends her and the children away, then uses the hair to trap the prince. He ends up falling from the tower and going blind. The Brothers Grimm knew that people don’t usually go blind from a fall, so they added some convenient thorns that get into the prince’s eyes. Then the prince wanders around for a long time, and by pure chance he comes upon the place where Rapunzel and their children are.

Rapunzel cries, her tears get into his eyes, and presto! they’re healed. It isn’t previously mentioned that she has any powers, but why not? In the Grimm version, they go to his kingdom and live happily ever after. In Persinette, Gothel hangs around tormenting them until she figures out that the prince actually loves her daughter, and then gives her blessing to the couple. 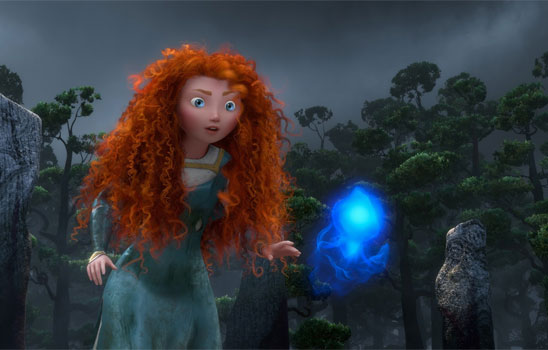 Brave is an original story by writer and director Brenda Chapman. Though she was canned from the project and replaced by Mark Andrews, he mostly just polished up the details and got the project on a faster timeline.  Brave is a Pixar work, but it shows the influence of Disney in its framing – it’s Pixar’s first fantasy film, first film with a female protagonist, and first film to take place in the past.

When Brave was released, it officially took place in 10th century Scotland. While the setting was lifted straight from the Scottish highlands, it doesn’t look anything like it did in the 10th century. The clothing spans an an oddly wide era, from the late Iron Age to the 12th century, and there’s even a corset in one scene- they didn’t appear until the 16th century. Castles of the type shown in the movie also came significantly later.

Chapman has stated that the story was inspired by her relationship with her daughter, and by the fairy tales of Hans Christian Andersen and the Brothers Grimm. As I explained earlier in this series, Andersen was Danish, the Brothers were German, and they both lived in the 19th century. That might be why the time periods got mixed up, and the influence of Celtic folklore is superficial at best.

Disney probably set Brave in the 10th century because that’s the last time Scotland had any bears. Unfortunately, there aren’t any surviving Scottish folktales that feature bears. However, there are a few stories from Andersen and the Brothers Grimm about men who have been turned into bears by witches or other magic workers. In all of these stories, a young and beautiful woman – who is often the protagonist – looks past the man/bear’s fearsome appearance. This proves she is a worthy bride once he turns back into a handsome prince. Brave’s plot is clearly meant as a subversion of these fairy tales and other stories from Disney. In Brave, Merida fights to free herself from marriage instead of proving she’s worthy of it. However, she does show that she can be a loving daughter, and that allows her to get her mother back.

The witch herself is a villain in countless fairy tales, including those written or adapted by Andersen and Grimm. Brave’s version, where the witch is a trickster rather than a villain, is a pleasant move towards modern values. In Grimm and Andersen tales, most witches are given a painful death before the end of the story. However, that might not have been true for 10th century Celtic tales. For example, Morgan le Fay, who is probably Welsh in origin, was a positive figure who helped and healed King Arthur until the 13th century, when she was turned into an antagonist.

The wisps do appear in Scottish folklore, although they’re also in folklore throughout most of Europe. Usually, they are depicted as a single light that appears in the marshes,* luring travelers into dangerous areas. Once the traveler gets close, the wisp moves farther away, staying out of reach. Sometimes the light is actually the lamp of an evil spirit, who eventually puts it out and leaves the traveler in the dark. When the wisps themselves are ghosts, they are generally depicted as unhappy spirits trapped in limbo. However, there are some stories where wisps lead brave travelers to treasure, so their helpful purpose in the movie isn’t an entirely new invention. 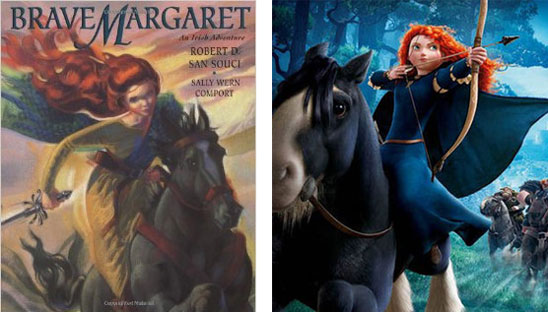 It’s also likely that Chapman and the Pixar creative team took some inspiration from Brave Margaret, a children’s retelling of a 19th century Gaelic folktale by Robert San Souci and Sally Wern Comport. Robert San Souci was a Disney consultant years earlier. He wrote the script for Mulan, and it’s possible he still had some influence on the Disney creative team when the concept for Brave was first conceived. However, past a vague concept, it’s clear that Brave went in a different direction. The similarities between Merida and Margaret are striking, but superficial. Unfortunately, Merida doesn’t slay large monsters like Margaret does. 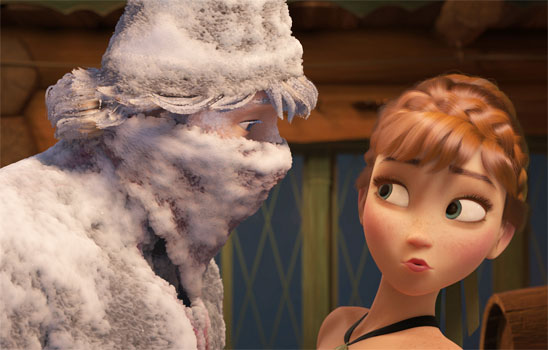 Anna is an older version of Gerda, the protagonist of Han Christian Anderson’s The Snow Queen, the inspiration for Frozen. Except Anna is a princess, knew roughly where she was going, and had money to offer people who helped her. Gerda was a penniless commoner who wandered aimlessly from place to place, getting an extraordinary level of help by using pity alone.* And by talking to animals. It’s hard to believe Disney left that part out.

Gerda didn’t have any siblings; she was on a quest to find her childhood friend, a boy named Kai. He didn’t hide on the other side of a door; he was just a jerk. But he had a solid excuse – a demon mirror infection in his eye and heart.* The shards of the demon mirror cause him to interpret everything good and beautiful as ugly and bad, and vice versa. As a result, the demonic Snow Queen looks beautiful to him. Then she carries him off, because why not? To create Elsa, Disney merged Kai and the Snow Queen together.* Now you see how Disney got into the weird position of trying to make Anna fix Elsa’s emotional problems. Gerda saved Kai from the Snow Queen, so Anna needed to save Elsa… from herself.

So where did Kristoff come from? Clearly from some Disney executive who thought the movie needed more testosterone. A boy who gets rescued by a girl? Not adequate. Instead of a mountain man, Gerda meets a series of women. First an enchantress who tries to make Gerda forget Kai and stay as her daughter, then an unusually helpful princess, followed by a spoiled robber girl who keeps her captive for a while, and finally a couple wise women who help her get ready to face the Snow Queen. To find Kai, Gerda receives direction from some flowers, a pair of crows, a couple doves, and a reindeer who takes her most of the way to the Snow Queen’s palace on its back.

Though the kingdom is never threatened with eternal winter in the original, both stories end in pretty much the same way – with Anna/Gerda using the power of love to defeat both the literal and metaphorical cold. On top of a frozen body of water even. Except in the original story, the lake was inside the Snow Queen’s palace, and called the Mirror of Reason, but was broken into thousands of pieces, and yet was stable enough to rest a throne on, and the finest mirror in the world.*

We’ve now caught up to the present; there are no more princesses in the Disney collection. Perhaps I’ll make another update for Moana in 2018. Until then… Let it go!

Previous post in series:
« The Origins of Pocahontas, Mulan, and The Princess and the Frog
It’s amazing what will kill people in fairy tales.
Leading some scientists to believe they are based on real phenomena, such as burning swamp gasses.
At one point she even breaks into a royal bedchamber while the rulers are sleeping, but they aid her on her quest instead of punishing her for what could have been an assassination attempt.
Probably the inspiration for the ice shards that threaten Anna.
Is that victim blaming?
This is not the same mirror as the one that gave Kai his eye and heart infection.