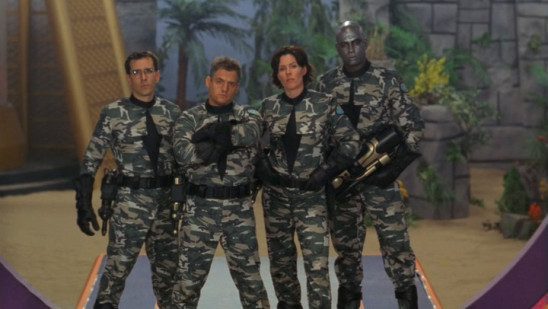 Sometimes technology is too good to be true. It might be so powerful that problems become trivial. Get into a jam? Just pull out that deus ex machina, it’ll clear it right up for you. Or the tech’s power level is fine, but taken to its logical conclusion, it would lead to a different story than the writers want to tell. Whatever the problem, a little creative worldbuilding is all that’s needed to head off a potential source of plot holes. The writers make sure that the problem is resolved in-world and won’t try to brush it under the rug. Right…?

A Zat’Nik’Tel is an energy-based sidearm used by the Goa’uld’s armies in the long-running series Stargate SG-1. It’s a powerful weapon with a cumulative effect. The first shot of a Zat gun stuns the target, the second kills, and third disintegrates. 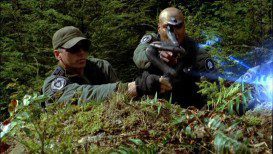 From a writer’s perspective, the Zat is a perfect weapon to arm your enemy. It allows our heroes to be captured in a firefight without requiring debilitating injury. It can also be used to raise the stakes. A prisoner that is shot once experiences a lot of pain, and if they are shot again they will be killed.

Stargate Command quickly captured a large stock of Zats and began using them in place of their sidearms, even on Earth. It was a big boon to have a phaser-like stun weapon when most of their technology was contemporary.* Overall the Zat became one of the most widely used weapons in the series.

But that third shot, while sometimes convenient for destroying a McGuffin, became a problem for the writers. Can any door, wall, or [insert obstacle here] be completely disintegrated just by shooting it three times? If so, physical obstructions will no longer be a realistic problem for the heroes.

The writers had a choice. They could either nerf the Zat gun by introducing a counter, leave it and work harder to write satisfying conflicts, or… they can stop mentioning it? Yes, somewhere in the middle of SG-1’s run, people simply stop mentioning that a Zat can disintegrate things. Eventually, because the writers were decently self-aware, they brought up this foible and made fun of themselves in a self parodying “Wormhole X-Treme!” episode. 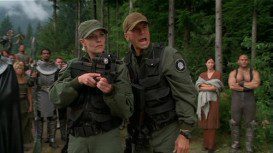 Beyond the Zat, Stargate also pretended in its later years that modern Earth weaponry was superior to the technology of an interstellar empire.* Stargate Command convinces rebelling slaves to trade in their advanced energy weapons with unlimited ammo for Belgian firearms circa 1990. This has all sorts of problematic implications, but that’s a topic for a different article.

In the Buffy-verse, the Initiative is a secret government organization tasked with capturing and studying the supernatural. They are led by a psychology professor and exclusively recruit University of California, Sunnydale graduate students for their black ops teams. Go figure. Despite being located next to a Hellmouth and having a limited and stressed out recruiting pool, the Initiative seems to be at the top of the food chain when we meet them in Season 4. That’s because they have an array of non-lethal tech that allows them to capture and essentially defang vampires and other demons. 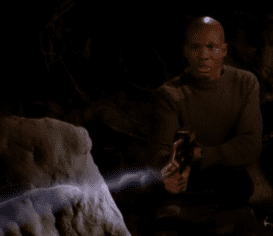 Forrest using an Initiative rifle on a demon.

Their primary firearm, which we’ll call the zapper, looks like a typical assault rifle with some shiny aftermarket parts. The first time we see it in use, the Initiative zaps Spike with a wave of energy that completely spoils his “I’m back and badder than ever!” speech. Once Spike has been captured, the Initiative puts a “chip” in his head that causes massive pain if he attempts to harm a human. For Spike, it’s the first step in a long and painful rehabilitation from villain to protagonist.

At the end of the season, the Initiative is hoisted on its own evil-science petard. While many of the faculty and students running this government black ops program were killed, the base itself was left intact (if a bit infested with demons). Surely the Scoobies could have picked up some of those zappers on their way out to add to their arsenal. At least grab one for Xander, who is the butt of all jokes for being so “normal.” With his years of being backup for the Slayer, and memories of how to be a soldier from “Halloween” in Season 1, Xander would have been a better black ops operative than all those grad students who failed to survive even one season. Sadly, despite the Scoobies’ habit of hoarding an arsenal of medieval weaponry that would make museums envious, no one thinks to add a zapper to the weapons chest. 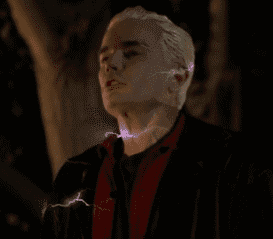 Remember to spay and neuter your vampires!

Then there’s the chip technology. If our heroes had been able to convince at least one of those Initiative surgeons to work with them, it would have been a game changer. Rather than killing vampires on sight, Buffy could capture them and give them the choice of getting a stake in the heart or a chip in the head. If they agree to the chip, they’re set free. Just like cat catch-and-release programs, the now harmless vampires would help keep the feral vampire population in check.* If only the writers had been willing to embrace change, we could have had an Animal Cops – Sunnydale spin off!

Before Voyager, it was well established that transporting through shields was impossible, but for the first few seasons of the show they can miraculously beam people aboard without dropping their shields. 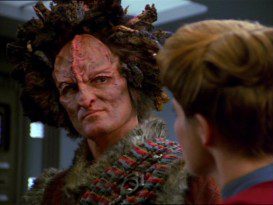 To be fair, I’d also break continuity to get away from these guys faster.

This is used for many last second escapes, starting as early as the pilot episode, “Caretakers: Part 2.” Voyager is outgunned by multiple Kazon ships, damaged and losing the fight. Chakotay decides he will even the odds by ramming his Maquis ship into one of the Kazon ships. Voyager never appears to drop their shields to transport the Maquis off their doomed ship, a fact which Chakotay manages to draw attention to by ordering Torres to drop their own shields for beam out. Chakotay then makes Paris wait for the last possible second before he is beamed over.*

Voyager would have been sitting with their shields down for a full minute before getting Chakotay aboard. But according to how the scene was framed, dropping their shields for even a fraction of that would mean certain destruction. Clearly one of the state of the art technologies Voyager was equipped with was a new transporter that could bypass their own shields. This would be a game changer for Starfleet, worth several more lines of exposition than some bio-neural circuitry. 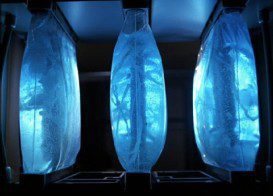 Which we find out has a ship-crippling cheese allergy.

Voyager continues to beam people through their shields and the enemy’s in combat situations for the next few seasons. Chakotay is beamed (again) off a Kazon ship they’re fighting, and they even take Kazon captains captive at one point to force a “diplomatic” solution.

Finally towards the end of Season 3, it seems someone reminded the writers about Star Trek continuity. In the episode “Rise,” the crew of Voyager communicates that a ground team is on their own, because Voyager can’t risk dropping their shields for an emergency beam out. And from then on it seems the writers of Voyager grudgingly decided to stick with continuity and restrict transporting technology to non-combat scenarios.

On the one hand it’s good of them to realize three seasons in that they’ve been breaking their own rules without providing the appropriate techno-babble justification. On the other hand, it’s a bit embarrassing that it took nearly three years to notice they were misapplying a technology that was critical to 30 years of Star Trek history.

Television franchises may quietly drop broken tech on a regular basis, but it’s not the best practice. If we want our audience to think our world is consistent and believable, then there should be in-world resolutions to any plot holes that arise from broken tech. Don’t quietly discard it and expect your audience won’t notice.

Each of the examples above are exceptions for series that more often trump, destroy, or find a justification to weaken overpowered tech. But because the writers tried to quietly sweep these technologies under the rug, they end up being what audiences remember. Storytellers can avoid this fate by addressing issues head-on with in-universe resolutions.

1997 to 2007
Make that two interstellar empires; we don’t want to leave out the Asgard’s Replicator troubles.
Catch-and-release works because cats are territorial, and the spayed and neutered cats keep other ferals from moving in and breeding. Vampires are also territorial, so the ones that are chipped will keep the dangerous ones away.
To make it all the more dramatic an escape!