Three Ways You Can Use Description to Mess With Your Readers 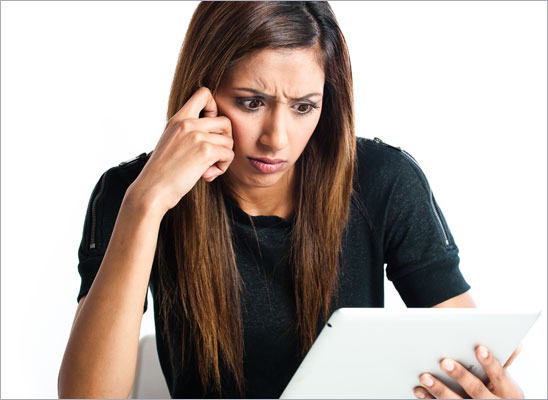 Your writing will immerse your readers in another reality. That’s a lot power in your hands. While you could use this power to create meaningful experiences for them, consider messing with their heads instead. By subtly twisting the way you describe objects and places, you can get all the double-takes and head-scratching you’ll ever want. Just use these three easy methods.

Never set the stage for events by describing where they occur first. Giving readers your description right away will allow them to imagine what’s happening in the story with confidence. Instead, provide as little as possible to start with. Without any contextual information, they’ll make incorrect assumptions about what’s happening. Then you can disorient them just by filling in the missing pieces.

For instance, let’s say this is your dialogue:

Character 1: I didn’t mean to lose the book; I’m sorry.

Character 2: If you want to make it up to me, you can tell me who took it.

Character 1: There were so many people… I don’t know.

Based on just the dialogue, your readers might think these are two friends meeting over coffee, or perhaps looking through the destruction left by a wild party the night before. Then you can inform them that character 1 is standing with his back to the edge of a cliff, and character 2 is pointing her sword at him. Your reader will be forced to look over your dialogue a second time and reimagine the whole scene with the new information you’ve given them.

That’s a dramatic example. You’ll probably prefer to do it in more subtle ways. Just belatedly give them some description that significantly changes the way they imagined the scene. Wait to inform readers that it’s pitch black, or everyone’s wearing swimsuits, that they’re caught in a downpour, or they’re under the covers of someone’s bed. Even if they don’t read the scene all over again, you’ll at least get a double-take as they ponder whether the meaning of it has changed.

As you feed your readers words, related visuals will pop into their head, forming a moving scene. Because they don’t do this consciously, it provides you with the perfect opportunity to insert random imagery into their visual rendition of your tale. Just stick some contrasting words into the mix. Of course, you might need a good excuse when explaining to confused readers why you’ve inserted the word “bestial” into your happy picnic scene. For that, look no further than the much-hailed metaphor or simile.

The creak of the swinging gate seemed loud in the stifling silence of the night. Beyond, Annie could see mist creeping around the headstones of the graveyard. Reluctantly, she entered. She hated these outings, but she had little choice; the ghost vine grew only over the dead. Stepping over a small mound, she reached down and delicately plucked the leaves like feathers from a chicken. When this task was done, she would be ready to make the potion.

The important thing is that your metaphors deviate from the general imagery of the scene. It should be just enough for a fast reader to get a random image, rub their eyes, and look at your text again. If you’re lucky, they’ll even blame themselves. After all, you didn’t actually put a chicken in your grave scene.

If you do anything so pedestrian as to write that there is a “chair in the middle of a room,” then your reader will simply take the default chair in their minds, and set it in a room like many they have seen before. You should never make following your story so easy for them.

Instead of calling it a “chair”, tell them it’s a “small square board, raised up by a thin pole at each corner, with another board vertically attached to one edge.” Then your readers will be forced to do engineering in their head in order to figure out that it’s a chair – or just give up in confusion. Either way, they’ll be playing right into your hands.

This technique can be applied in a huge variety of places. Just switching out a clear word for a vague one can do the trick in many cases:

If anyone asks you about your word choice, just tell them that you’re a poet and it’s art. Only the enlightened can understand it.

When confusing your readers, make sure your viewpoint character is not confused along with them. If they are, your carefully laid traps will become an intriguing mystery instead of a stopping point. Even worse, you’ll be forced to explain what’s going on when your character figures it out.

You should also avoid hiring a solid editor. They always have ulterior motives like “positive reader experience” and “publishable books.” They’ll ruin all the hard work you’ve put into making your audience vexed and confused. Then you could actually sell your story. Nightmare.